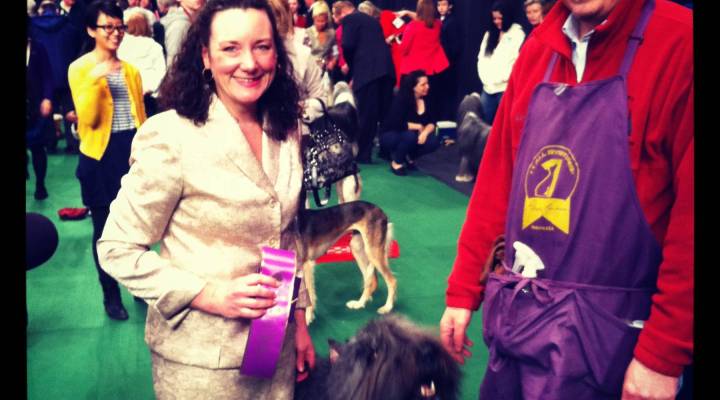 The cost of being ‘Best in Show’

The cost of being ‘Best in Show’

Tess Vigeland: So we pet owners make a serious financial commitment when we decide to take on furry family members. Thousands of dollars over their lifetimes. But there are subsets of us that go far, far beyond normal ownership costs. You may have seen the New York Times article this week about Fido and feline foodies that dine on high-end kibble. Fancy Feast apparently isn’t enough. So Purina promises to provoke purrs with a line called “Elegant Medleys,” for 20 cents more per three-ounce can.

But if you think that’s ridiculous — and I do — you’ve never seen the kind of money that’s spent to finance a dog show champion.

Garrison, Danica, Lara and Gypsy have attended multiple dog shows, either competing or providing moral support for one another. But one thing they cannot do is pay for the travel and entry fees. And so…

Kuhn: We have four dogs, which is all we’re allowed to have where we currently live.

Two Bouviers, two Scottish terriers. And if you’ve ever seen the movie “Best In Show” — as many of us dog lovers have — you’ll remember just how much love a terrier inspires.

No, that is not Pilar and Rod, but they do love their dogs — 230 pounds of canine in a modest home in Inglewood on the southern edge of Los Angeles. Rod sells animal feed. Pilar works in the entertainment industry.

Kuhn: We met at the dog show. We actually met at the Eukenuba National Championship in Long Beach.

Ott: I sat down next to her in the groups and the rest is history.

Kuhn: So the two Bouviers that we have now, Garrison is the one who’s going to Westminster. He’ll be five in March. And then Danica is our younger bitch, and I apologize to listeners, but in the dog world, we have dogs and bitches. She’s 19 months old. We’ll hope to take her some day, but not every dog gets to make the trip to Westminster.

This year, Garrison gets that singular honor, after winning the equivalent of the dog show scratch ticket.

Kuhn: When you do your entries at Westminster, you cross your fingers that you’re accepted and then you start to get more communication you realize your dog’s entered and then you get your entry packet and you’re like, “I’m in!”

Vigeland: So you won the lottery.

Kuhn: We won the lottery! Yes! And we make no money off of it; we actually are spending money to win this lottery.

That’s right. There is no real money in dog shows, with one or two exceptions. But even so, people who show dogs spend howling amounts of money to take them around the country.

Ott: You have gasoline for the whole trip.

Ott: You have hotels for every night.

Kuhn: We buy certain shampoos, we have force dryers and grooming tables.

Ott: You have your food bills.

Kuhn: I think in scissors alone downstairs, I probably have close to $1,500.

Ott: Any advertising we did.

Ott: Not a cheap hobby.

Vigeland: I think there will be people who don’t understand how someone can spend that kind of money.

Kuhn: My mother doesn’t understand and she loves our dogs.

Vigeland: So, how do you explain that?

And that $18,000 they spent last year, by the way? About a fifth of their household income.

Westminster is, of course, best of breed in dog showdom. This year marked its 136th competition, with more than 2,000 dogs of 185 different breeds.

Commentator at Westminster show: A lot of great animals we’ve got to see tonight. The wonderful herding group won by the puli. The Bouvier was second, the rough collie was third and the old English sheepdog was fourth.

Evidence of the amount of money required to be part of the event is strewn throughout the corridors of New York’s Madison Square Garden. Kennels. Kibble. Giant duffels full of grooming tools. Hand-knit sweaters in garrish pinks and yellows for the less shaggy of the breeds.

Beth Blankenship of South Carolina was brushing chalk onto her dog’s legs. Apparently it builds body on the coat. He’s a Keeshond, known as Grand Champion Trumpets It’s Good To Be King. You can call him Louie.

Beth Blankenship: It depends on a lot of things, but I would say, $20,000 to $50,000 a year. There is no monetary return. It is a hobby, a form of enjoyment and you get to do it with a living, breathing companion. I guess people have hobbies with inanimate objects, so this is even more emotion driven. So we definitely sometimes make foolish decisions to spend money that maybe we shouldn’t.

Just a few kennels away, a snow white toy dog was getting a last-minute clipping from his handler.

Vigeland: And who do we have here on the table?

Fahy: We have Lormi’s Standing Ovation. She’s a grand champion. She’a three year old bichon. And she’s a typical woman. When she wants to show, she’ll show. Last year, I probably — between her and her mother — roughly speaking, probably about 20 grand. I retired once. I came back to work so I can pay for her.

And just a ways down the concourse, we found Annie Hubbard of Richmond, Va., standing over her English sheepdog Andy with a cherry red blow dryer.

Vigeland: So how do you make the decision to go ahead and spend that kind of money on your dog?

We caught up with Pilar Kuhn, Rod Ott and Garrison the Bouvier inside the arena, just outside ring 4. A pekingnese would go on to win “Best in Show” the next evening. But Pilar was clutching a gold medallion, an award of merit, that Garrison had just won from the judge.

Kuhn: To be out there with top handlers all across the country, with top dogs, with my dog, to get an award of merit at the Garden, to me this is just like getting “Best of Breed.”

I asked whether the win would make Garrison more valuable in some way, any way that could help defray the costs of bringing him here.

Kuhn: Not necessarily in value. I mean, we might get a few more calls for stud fees, and I’ve got some bragging rights nobody can take away from me or this dog.

And speaking of this dog, what would his prize be? Plenty of admiration, kisses and a Tupperware tub of beef. Problem was, it had this spicy marinade on it. So without even hesitating, Pilar licked it off and gave the prize winner his treat.