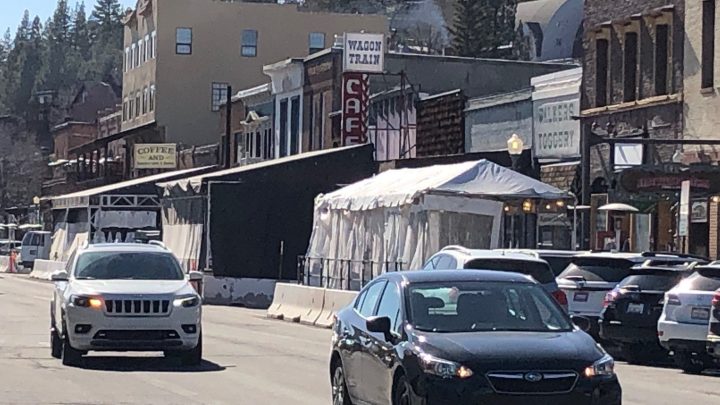 COPY
A street in Truckee, California. Since the pandemic hit, the mountain town has become a destination for remote workers, who've brought higher prices and increased congestion. Matt Levin/Marketplace

A street in Truckee, California. Since the pandemic hit, the mountain town has become a destination for remote workers, who've brought higher prices and increased congestion. Matt Levin/Marketplace
Listen Now

Kaya Brown is a true Truckee local. She’s lived in the small California mountain town almost all her life.

She knows every inch of the Legacy Trail, which winds along the Truckee River. She greets the joggers and walkers passing by with a warm, easygoing welcome.

Like other longtime residents, she also has an independent streak. Which lately has been a problem.

Like many other dogs in Truckee, she’s used to roaming freely off-leash.

“This place is dog nirvana,” said Carla Brown, Kaya’s owner and a professional dog trainer. “If I was a dog, this is where I’d want to live.”

But dog nirvana has gotten crowded. Since the pandemic hit, Truckee has seen an influx of San Francisco Bay Area dogs tethered to their Bay Area owners. When on-leash city dogs meet unleashed Truckee dogs, the results can be … stressful.

Over the past year, small, rural places across the country have been inundated with remote workers seeking beautiful landscapes and bigger houses. The phenomenon has become so common that it’s identified by a pandemic buzzword: “Zoom towns,” taken from the popular videoconferencing software that’s unleashed workers from their offices.

Truckee may be the Zoom town capital of California. Nestled in the Sierra Nevada mountains about 20 minutes from Lake Tahoe, the town of 16,000 has long been a hiking and skiing destination for vacationers from the Bay Area.

When Brown moved here in the 1990s, things were simpler.

“It was a sleepy, little town,” Brown said. “There was one grocery store, there was one hardware store, which was the center of everybody’s existence.”

The town has grown a lot since then. Now there are brewpubs and boutiques that sell sweatpants for $90.

But Truckee hasn’t seen anything like the growth it experienced in the past year. Second homeowners who used to spend a few weeks here in winter and summer are now staying months on end, unchained to a Bay Area office. New arrivals are ditching temporary Airbnbs for longer-term rentals.

Truckee won’t know the exact growth figures until the Census Bureau releases new numbers this fall. Mayor Anna Klovstad said she’s seen early estimates of as many as 1,500 newcomers, a roughly 10% population increase in just over a year.

“We’re a small town, and we like it that way,” Klovstad said. “When I walk into the bank, they know my name, they ask me how my kids are. I love that. And so we’re really working hard to try to help our newer residents understand what we call the Truckee way.”

There has always been tension between Truckee locals and the second homeowners and tourists who prop up the town’s economy.

“There is a lot of entitlement with the people that come up here,” said Jenny Graham, who was born and raised in Truckee and is now retired. “The Bay Area is really different than mountain living.”

Graham and her husband will occasionally spend happy hours at a local bar overlooking what the locals call Malfunction Junction, a constantly congested three-way stop that no tourist or newcomer understands how to navigate.

“If you sit there and watch it, it’s entertaining,” Graham said. “It’s amazing there haven’t been more accidents.”

That uniquely Truckee dinner theater now has a touch of schadenfreude to it. Malfunction Junction is jammed with delivery trucks, and you hear a lot more honking than you used to.

Towns like Truckee don’t have the infrastructure to accommodate such rapid growth, especially if that growth becomes permanent. The roads and roundabouts are congested, the already slow internet is even slower, the grocery stores are packed.

But most pressing is the town’s limited housing stock. Truckee already had a housing shortage before the pandemic hit. With the arrival of the Zoomtowners, home values are up 20%, according to Zillow.

Randy Beuerle is a carpenter who lives in Tahoe City, a smaller town outside Truckee. His wages are up with the boom in homebuilding and renovation. But he’s increasingly unsure he can afford to live there. When his rental lease expires at the end of the month, he’s unsure where he and his wife will end up.

“We wouldn’t prefer at this age, in our 40s, to move back with roommates, so that’s kind of disappointing,” Beuerle said. “But we definitely understand that we’re way ahead of a lot of the people that we know that literally have no place to go.”

People from the Bay Area are used to being blamed for rising home prices wherever they go.

Patty Padilla moved to Truckee from San Francisco last August. She has no problem with off-leash dogs, as long as they’re well behaved. And she said she gets along with the locals just fine.

“They automatically think, ‘Oh my God, who is coming in and taking over our city?'” Padilla said. “And then they get to know us. They came from somewhere at some point too, right?”

Padilla’s not wrong. Plenty of Truckee residents who consider themselves locals moved here from the Bay Area in the 1990s or 2000s. And there’s no unanimity in Truckee customs and traditions — some born-and-bred residents want dogs to stay leashed, and many welcome the bars and restaurants that opened in recent years.

Padilla loves it here. With her social-impact event-planning company now fully remote, she’s seriously thinking of staying. She misses some parts of San Francisco. But lately, more and more of San Francisco is following her to Truckee.