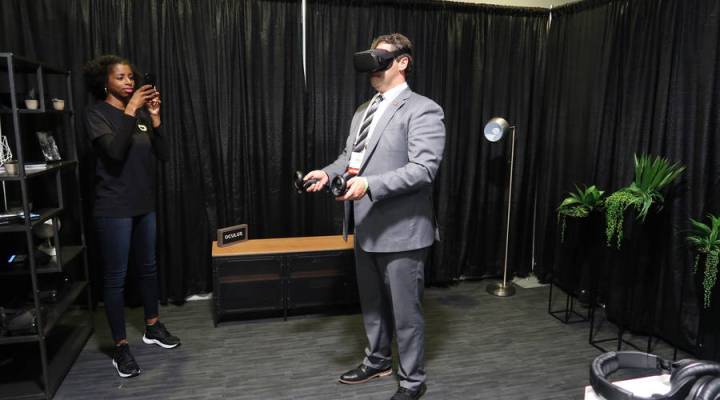 COPY
Oculus on display at CES on the Hill. Robyn Edgar/Marketplace

Oculus on display at CES on the Hill. Robyn Edgar/Marketplace
Listen Now

The Consumer Technology Association brought a scaled-down version of its popular Consumer Electronics Show to Capitol Hill this week in an effort to change the conversation for a minute amid mounting pressure from lawmakers looking to increase regulation of tech companies. With privacy violations, data breaches and concerns over net neutrality regularly making headlines, tech companies used the event to mingle with members of Congress and show off their latest gadgets.

IBM demonstrated how it’s using artificial intelligence to help train seeing eye dogs. A 14-month-old puppy named Kate wore a smart collar powered by IBM’s Watson. The collar tracks her location and her reactions to various stimuli like temperature, loud noises and stress to see whether she is suited to be a guide dog.

“In the last couple of years, in particular, it’s been more important than ever for companies like mine to explain the positive benefits of technology,” said Chris Padilla, vice president for government affairs at IBM. “There’s been a lot in the news about problems with social media or lack of privacy. So one of the reasons we’re up here with a guide dog wearing a smart collar is to show that technology can be used for a lot of good as well.”

The tech industry overall has increased its focus on Washington in recent years. Tech lobbyists are spending more time courting members of Congress and government agencies, as well as increasing their campaign contributions, said Dan Auble, a senior researcher at the Center for Responsive Politics, which tracks political spending.

“A decade ago, they weren’t really doing much lobbying,” Auble said, “and today, they’re one of the bigger players in D.C.”

In 2018, CTA spent almost $5 million lobbying in Washington, and that’s on top of the tens of millions spent by individual technology firms. Additionally, Auble said, “some companies like Microsoft and Google are spending millions of dollars on more typical campaign contributions.“

But a lot of the industry’s effort comes down to face time, which is why close to two dozen tech firms set up booths in a corner of the Rayburn House Office Building for CES on the Hill. There were demonstrations of how to use a virtual reality headset to help you become a better public speaker, an AI robot to teach kids a new language and a robot puppy that can help an elderly parent.

Cheryl Goodman, a spokesperson for Sony, said demonstrating the practical applications of a device like Aibo, the company’s AI-powered robot dog, can help lawmakers see tech as more than just toys and flawed instruments of data collection.

“Technology and Congress have to be in lockstep in order for things to move forward, especially as it relates to privacy,” Goodman said. “And so the more that companies can do to educate politicians and people in the ecosystem of politics, the better we’re all going to be served.”

And with issues like privacy, artificial intelligence and the rollout of fifth-generation wireless technology ripe for regulation, the industry would rather lawmakers focus on puppies than privacy scandals as they draft legislation.