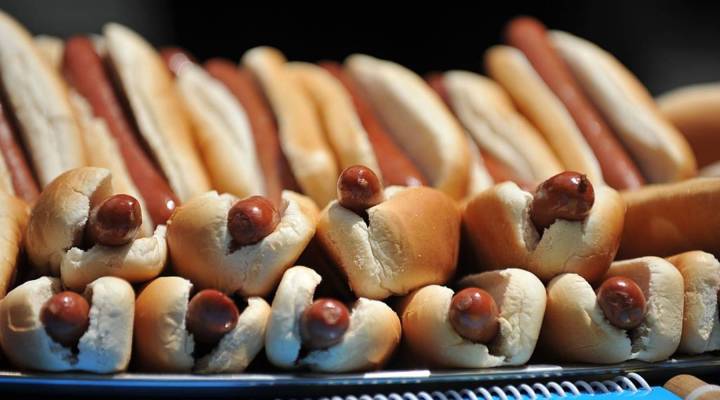 COPY
What do you like on your hot dog? Staff Stan Honda/Getty

What do you like on your hot dog? Staff Stan Honda/Getty
Listen Now

‘Tis the season — for hot dogs! If you’re heading to a Fourth of July gathering, someone will be probably be serving hot dogs. So it got the folks on Marketplace Weekend thinking about the hot dog industry and why we love to eat smoked sausage so much. Eric Mittenthal, president of the National Hot Dog and Sausage Council (yes, there is such a thing) helped us out with some answers. Now, you too can know more than is really necessary about hot dogs. You’re welcome.

What are hot dogs made of?

Hot dogs are made from the piece of meat cut away from steaks and roasts and then are ground up finely, mixed with spices, stuffed into a casing and cooked. The U.S. Department of Agriculture has some stats hot dogs have to conform to, says the National Hot Dog and Sausage Council (NHDSC). Hot dogs “may contain no more than 30 percent  fat or 10 percent water. A tiny fraction—  up to 3.5 percent— can be a non-meat binder, like non-fat dry milk, cereal or dried whole milk or it can be 2 percent isolated soy protein.” Just so you’re clear. And  in case you’re wondering, a veggie or vegan sausage does not qualify as a hot dog.

How many hot dogs do Americans eat?

Over the course of a year, Americans consume around 20 billion hot dogs, 150 million are eaten on Fourth of July alone. Over a third of hot dogs are consumed between Memorial Day and Labor Day, so we’re in peak hot dog eating season.

So I’m doing the math, and that works out at around 70 hot dogs per person per year

Yes, that’s about right. So a little less than one a week over a year. And far fewer than one a day. And yes, we’re all trying to figure out when we last ate a hot dog, too.

Despite the fact that ketchup is the second most popular condiment in the country (beaten out only by mayo), what do people most like to put on their hot dogs? Drum roll, please — mustard. There are regional preferences, though. The good people of Chicago do not like ketchup on hot dogs, according to NHDSC’s Mittenthal. He said he’ll make an exception for ketchup-loving kids, but his group recommends that people over 18 avoid ketchup. Where’s the love for the red sauce?

Should I be eating my hot dog in a certain type of bun?

But here’s a question. Is a hot dog a sandwich? There’s meat in a roll of bread, so…

Mittenthal puts is simply: “A hot dog is NOT a sandwich.” The internet has almost melted down debating this question. You can find all the reasons why the NHDSC does not agree with the hot-dog-as-sandwich idea, here.

What do you think? Would you count a hot dog as a sandwich? If you want to share your thoughts, drop a line to Marketplace Weekend at weekend@marketplace.org. You can also leave a message on our voicemail, that’s 1-800-648-5114.