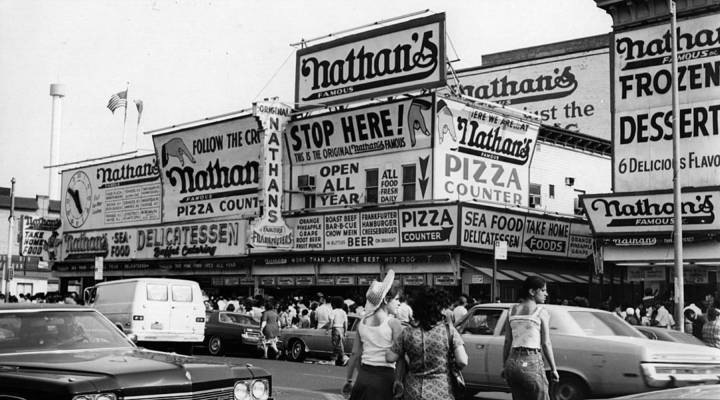 When Nathan Handwerker arrived in New York in 1912, he had little money, no job and couldn’t read. But just four years later, he would found the company that would become a globally recognized name in the food business.

Lloyd Handwerker, Nathan’s grandson, made a documentary about his grandfather and grandmother’s story a couple of years ago and also chronicled his family’s history in the new book “Nathan’s Famous: A Family Saga of Coney Island, the American Dream, and the Search for the Perfect Hot Dog.”

Handwerker said one of his grandfather’s first jobs was in a bakery in his home country of Poland, a job he enjoyed because, as one of 13 children, “he knew what starvation was at home.”

When Nathan Handwerker founded Nathan’s Famous on Coney Island in 1916, he started with only 5 feet of counter space.

“It really took off during the Depression, ironically,” Handwerker said. “He was selling food for a nickel and drinks for 2 or 3 cents. So if you were a poor family, you could feed your family for that.”

Thanks to long hours and some extremely dedicated employees, Nathan’s Famous became a mainstay of Coney Island.

“The crowds became enormous. I mean, one of my relatives said, ‘You felt like they were going to pick up the stand and move it into the ocean.’”

Nathan’s has attracted some historical figures throughout its hundred-year life, too. Jackie Kennedy, Cary Grant, Marilyn Monroe — everyone seemed to eat at Nathan’s when they went to Coney Island.

Lloyd Handwerker said Nathan’s Famous was sold out of the family in the late ’80s. But a century after its start, Nathan’s Famous products can be found in movie theaters, grocery stores and all over the world.

“There’s a reason that name [Nathan’s Famous] resonates so much with the public. You know, they worked their heart out and created a name that’s lived for 100 years,” Handwerker said.