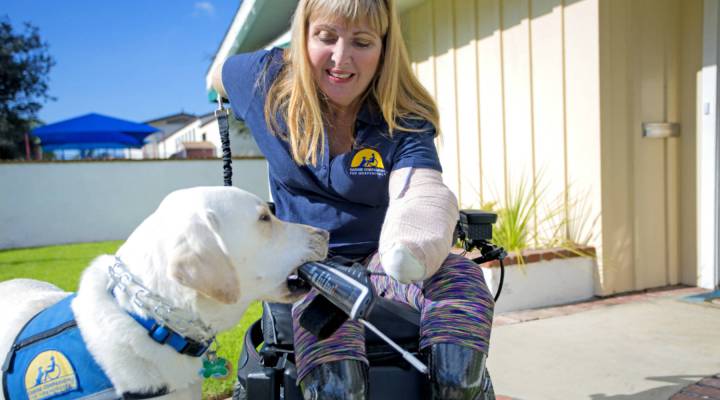 After a year and a half of basic coursework, six months of professional training, and a final exam, Patch — a Labrador-golden retriever mix — was ready to become an assistance dog for Annette Ramirez.

Ramirez, a 53-year-old resident from Manhattan Beach, California, is a quadruple amputee who lost her limbs due to a medical mishap that occurred when she was undergoing a hysterectomy back in 2012.

At a friend’s recommendation, she applied for a service dog from Canine Companions for Independence (CCI), a nonprofit organization that provides assistance dogs to individuals with disabilities. She spent about two years on a waitlist before getting to bring Patch home in August 2016.

It’s not just the physical tasks he performs that makes her life easier, like picking up dropped items or opening refrigerator doors. It’s also the emotional support he provides.

“I went from being an able-bodied person to being disabled. I spent half of my life being just a regular person. And so when I got out of the hospital, I had to re-acclimate myself to a whole new world,” Ramirez said. “[Patch has] brought my confidence back to me. Just the companionship is even that much more than the physical aspects.”

Annette Ramirez with her dog Patch.

We rely on dogs for things that are, in some cases, beyond our own capabilities. They can sniff out bombs, track endangered species, herd other animals, guide people with disabilities, deliver life-saving medicines, rescue people who are drowning, and assist those with seizure disorders.

Even just petting a dog can help lower your blood pressure.

“It’s wonderful to watch these dogs work,” said Pete Coppolillo, the executive director of Working Dogs for Conservation (WD4C), a group that trains dogs to protect wildlife and wild places. “They open doors to things that we wouldn’t be able to do.”

So what does it take to land a job as a canine? The resume they need can vary widely depending on the organization and the specific task they’re training for.

Programs like Canine Companions for Independence have their own breeding programs for assistance dogs. CCI uses Labradors, golden retrievers, or Lab-golden crosses, like Patch, primarily because they’re “trainable and social dogs,” said Becky Miller, a participant program manager for CCI.

Volunteers work with dogs for the first 18 months of their lives, helping them with basic obedience training and socialization. Then when they’re about 18-20 months old, these dogs go to one of CCI’s six regional training centers in the U.S. for six to nine months of professional training, where they perform tasks like opening and closing doors.

Each dog is trained with a general skill set that can be customized for the needs of the organization’s clients. Dogs that help people with physical disabilities may learn how to turn light switches on and off or help somebody pull up their bed covers, Miller said.

Patch will push the accessible door button (that blue button depicting a person in a wheelchair) for Ramirez at the mall, help retrieve hard-to-reach items, and even carry her Costco receipts to employees standing at the warehouse’s exit door.

Those in need of a dog have to fill out applications, go through a phone interview, complete medical and professional reference forms, and then do an in-person interview. If they’re selected, they’re placed on a waitlist. Once CCI finds a dog to suit their clients’ needs, both dog and human live at one of CCI’s six training centers for a two-week course.  The clients learn about the responsibilities of having a guide dog and then complete a written final and a “practical final,” which involves them giving commands to their canine. (For example, Patch was told to avoid snatching food that had been dropped in front of him.)

At a place like Working Dogs for Conservation, members turn to shelters to look for potential trainees, according to Pete Coppolillo.

“Part of the reason that we do that is a lot of the qualities that we’re looking for are the same behavioral characteristics that landed those dogs in the shelter in the first place,” Coppolillo said. “We look for super, super high drive. They want to play with their ball.”

The group trains these dogs, usually when they’re about a year old, to detect certain scents that can help locate, say, an endangered species. Right now WD4C is working on a proposal to bring these dogs to Madagascar so they can help find ploughshare tortoises.

Virtually all dogs have a spectacular sense of smell, so WD4C assumes they’re already naturally talented at that, Coppolillo noted. To help narrow the search, the organization looks to working breeds like border collies, Belgian Malinois and Dutch shepherds.

Police organizations will also select for breed; popular ones include, of course, German shepherds.

Others, though used less frequently, include Rottweilers and Doberman Pinschers, according to the National Police Dog Foundation.

Police working dogs begin training, ideally, between 12 and 15 months, and can learn how to provide personal protection and detect explosives or narcotics. During training, they’re taught how to show aggression and attack someone who threatens their owner. Sometimes they’re commanded in a foreign language like German, so that they’re even less likely to respond to another person’s commands.

CCI’s Becky Miller noted that at her organization, it’s important that a dog doesn’t show any sign of stress or anxiety if they’re working.

“We make sure that the dogs that we place are comfortable,” she said. “If they want to be a couch potato, or have any health issues, or want to chase cats all the time … we release them from our program.”

If a dog gets released from the program, they’re offered back to the volunteers who raised these dogs during their first 18 months to be adopted as a family pet, Miller added.

If dogs with WD4C are not equipped to deal with their working conditions, the organization will work to find them a home, while K-9 dogs who don’t continue with their programs may end up back with their handlers.

As was the case with Lulu — a black Labrador retriever who trained at the Central Intelligence Agency to sniff out explosives. After a few weeks of training, she decided that line of work just wasn’t for her and showed signs of disinterest. Her handler adopted her and now she spends her time sniffing out rabbits and squirrels instead.

Pete Coppolillo said their dogs can “make it into ripe old age,” and will usually stay with their trainers.

Meanwhile, CCI’s dogs have a working life of about eight to 10 years, thought that’ll depend on the job, Miller said. Dogs who pull wheelchairs, for instance, will probably have to retire sooner. Similarly, police dogs tend to retire at about 10 years old, and will stay with their handlers.

“With some people, a family member will take their first dog, while the person in need of assistance gets a second dog,” said Chris Diefenthaler, an operations administration with Assistance Dogs International, which helps train and place assistance dogs. “So the situation is based on the person who has it. It’s a very personal choice.”

Annette Ramirez said she plans on keeping Patch after he retires. Prior to the surgery, Annette had worked in nonprofits, serving as UC Berkeley’s director for alumni relations, groups and events, and then as USC’s director of reunions. She said her affinity for people is probably why she and Patch were matched.

“He’s gregarious. You can tell. He’s friendly. He’s a people dog. Everywhere we go, I find that he brings so much happiness to people as long as they’re kind,” said Ramirez. “And that’s the kind of person I am.”