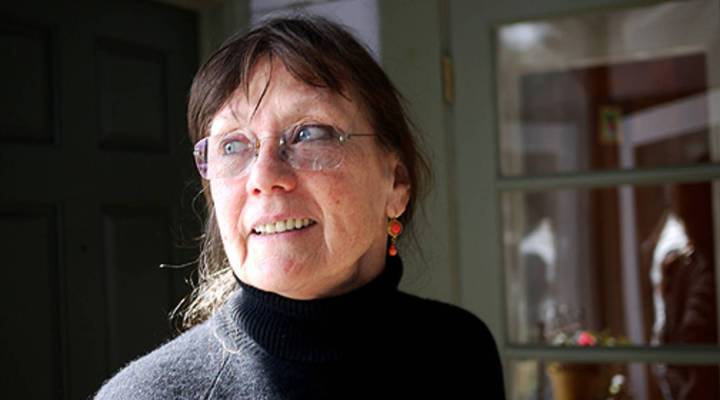 COPY
Susanna Wilson, 70, lives in Grass Valley, Calif, where she has a workshop setup to make children's clothing Josh Rogosin/Marketplace
Through The Ages

Tess Vigeland: If there’s one common thread through every single one of the decades we’ve profiled here today, it is the need to save for retirement. It is, quite literally, never to early to start that effort. Most of us haven’t saved nearly enough at any decade. In fact, the Employee Benefit Research Institute recently found the majority of Americans have stashed away less than $25,000 for their golden years. But even those people are in better financial shape than 70-year-old Susanna Wilson, who saved nothing.

Tess Vigeland: We went to visit Wilson at her home in Grass Valley, Calif., earlier this month.

She was still digging out from a fierce snowstorm when we arrived.

Vigeland: Hi very nice to meet you! And who is this?

Wilson: This is Rooney.

Grass Valley is an old gold-mining town of just 12,000 people at the foot of the Sierra Nevadas. Wilson lives in the house she grew up in.
When she moved back a few years ago, she took out a mortgage to put in a new roof and foundation, and update the small, cozy kitchen.

Susanna Wilson: So, I made some soup for you so we can have a quick lunch. Did you eat already?

Vigeland: Oh that’s so sweet, no we haven’t.

She fed us butternut squash soup with a salad and some local sourdough bread. But by the time we left, I wished we had paid her for such a lovely meal.

Wilson: My Social Security is around $800 a month. And I have a small mortgage on this house. And I have electric and I have a dog that needed to have his teeth cleaned.

Tough doesn’t begin to cover it. Wilson subsists on those government checks, plus a one-day-a-week job at a local jewelry store that pays $12.50 an hour. She also makes dresses for little girls.

Sound of sewing machine and scissors

But she sells only about six a month for around an extra $200. All told, a really good month nets her around $1,400. A third of that goes toward fixed expenses like utilities, insurance and property taxes. She pays $300 toward that mortgage we mentioned. And the balance goes toward the monthly minimum payments on $9,000 in credit card debt, racked up over the years for daily living expenses.

Wilson: I can never retire, I will never be able to retire.

Vigeland: How do you manage?

Vigeland: What do you fear most at this point?

Wilson: Um, that I will become disabled and not be able to work.

Wilson: I don’t know. I guess I sell my house?

One of her credit card statements helpfully points out that it will take her 70 years to pay the card off if she continues to send only the minimums.

Wilson: I, probably about every two weeks when the bills are due, that’s when I get really worried. I think I might just have to declare bankruptcy. It’s the credit card debt. I just can’t live with that.

It should never have come to this. Wilson attended Berkeley in the late 1950s, though she left before graduating to move to New York and marry her college sweetheart, the minimalist sculptor Walter De Maria. She spent her prime earning years as a designer in New York. Her clothing line, O’Susanna, sold in the late ’70s at retailers like Saks and Bloomingdale’s. National magazines featured her perfumes, including a popular fragrance called Strawberry Love.

In her 40s, Wilson moved back to California and became a publicist. At her peak, she made around $65,000 a year. But after two divorces and a child, not a penny of that made its way into a retirement fund.

Elizabeth Baer: We have a tendency to either use the income that we generate in our business to build the business, or to enjoy the fruits of our labor now rather than thinking about the future.

Elizabeth Baer is a 67-year-old certified financial planner in Lansing, Mich., who reviewed Wilson’s finances for us. She says a lack of retirement savings is far too typical for small business owners. And Wilson is an example of that.

Baer: She’s living on a subsistence of, well let’s just say it’s not a wonderful diet. She’s barely eating appropriately, trying to meet these expenses and of course, the biggest drain is her debt.

So Baer recommends a reverse mortgage. Those allow older home owners to tap their home equity, and they don’t have to repay anything until they leave the house. Baer says she’s never recommended a reverse mortgage before, but that Wilson is an ideal candidate. She could potentially wrap in her $5,000 mortgage and then take cash out. Wilson is also part-owner, with her two brothers, of several tracts of timber land in northern California. Baer says they must consider selling.

Baer: Whatever the purpose of this land was before, today’s the rainy day and she needs to generate some significant capital. It may not be that much. But at this point, $25,000 would change her life totally.

Since talking with Baer, Wilson has started to pursue both suggestions. And she’s continuing to live by Baer’s advice to be strong and hang tough. Perhaps the one comfort Wilson can take in her own situation is that she’s got a lot of company as an older American who just didn’t save and now lives in fear of what comes next. Overcoming that fear may be the key to recovering her financial health. And she’s confident, somewhat, that that will happen.