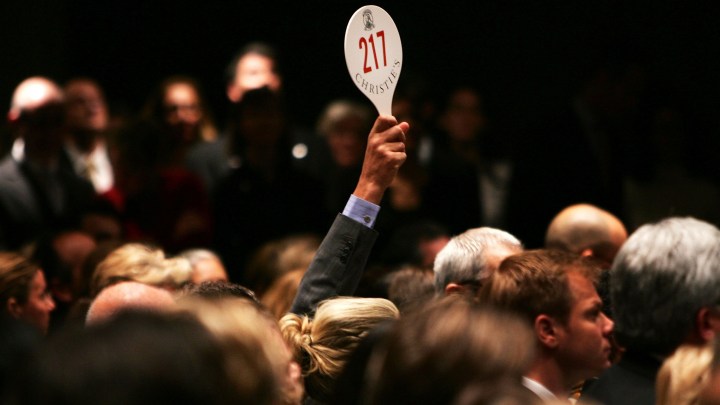 Have you ever paid more than you think something is worth in a heated eBay auction? Things get hairy in those last few minutes, and before you know it, you’ve spent way more than you intended in order to win?

That feeling is called the “winner’s curse,” and it’s at the heart of research done by Stanford economist Robert B. Wilson, who jointly received the Nobel Memorial Prize in Economic Sciences with economist Paul R. Milgrom on Monday.

“It’s easy to think in terms of people estimating the value of something. And the one who overestimates it the most is the one most likely to win,” Wilson said. “And so, you know, they can have regrets afterward. But with a good bidding strategy, you don’t get caught that way. But, naively, people do get caught.”

Wilson said auctions aren’t just limited to bidding wars for livestock or fine art — they’re part and parcel of our everyday lives. He spoke with the BBC’s Victoria Craig for the global edition of the “Marketplace Morning Report.” The following is an edited transcript of their conversation.

Auctions in advertising, licensing and more

Craig: We typically think of auctions as sort of these chaotic events to either sell livestock or high-end art or collectibles to the highest bidder. But auctions actually take place far more frequently, in everyday situations that affect how we live our lives, don’t they?

Wilson: Well, they do because now it’s used almost in continuous time to allocate, I don’t know, advertising slots on internet search engines, on eBay, or 100 other venues where it goes on all the time. So it’s very widespread. We could talk about the spectrum auctions, because there people are bidding for packages of licenses. Here in the United States, at least they had to bid for licenses that cover multiple areas. And so that’s a very complicated object that’s filled up with many components. So the auction design is very elaborate to cope with that.

Craig: And so you have actually come up with a more effective auction format that was first used in the U.S. to sell radio frequencies to telecommunications companies.

Wilson: Yeah, that was a continuous ascending auction. Over time, bidders would increase their bids, they were forced to buy what’s called an “activity rule,” to constantly be engaged in bidding for the objects they were interested in. And they, over time, accumulated stakes in different licenses to build the package that they wanted.

It was a long auction, [it] took four months, two rounds a day, and the bid increments were very large. We’re talking in terms of hundreds of millions of dollars for some of the bid increments. It would move slowly, so that the finance committee of the major companies could meet each round twice a day to evaluate whether they are willing to go to the next bid increment. So it was a complicated, slow-moving auction, but it raised billions of dollars for the government and it produced what we think is a pretty efficient allocation of the licenses. Four months is a much faster time than the old process of allocation based on lobbying activity and whatever the commission favored to assign the license to.

Craig: You’re clearly not the only one who sees it is more efficient. Your theory, your method, has been applied to auctions of other goods and services as well, hasn’t it?

Wilson: Oh, yeah. There are lots of these — we call them “combinatorial auctions,” “package auctions.” There are many products now that are sold that way. I mean, my fellow awardee, Paul Milgrom, his company Auctionomics is a sort of a sideline of his, and they design those auctions for different kinds of products. I even recall just now in my mind, that he was designing an auction for milk producers. Milk is of itself a package of things — you know, it’s cheese and curd and whey, and all those components. So it’s just this minor instance of lots of applications.

The benefits of a more efficient auction

Craig: Now more efficient auctions aren’t just beneficial to companies or governments, but they benefit people like me and you, don’t they?

Wilson: Well, the intention is to get goods allocated efficiently. So, just to take the spectrum auctions as the example: It used to be that it was influence before a commission that would lead which party got a license or some other privilege, and without paying a fee for it. So here, the value of the license are the ones that tend to win the auction, and it produces a more efficient outcome. Those that are going to be able to provide the best services, it enables them to bid the most for the license.

Craig: And finally, Robert, what does it mean to you to win this prize?

Wilson: Well, it’s very rewarding, because this is a third of my students who’s won. Paul was a student of mine in the ’70s. And two other students of mine, Al Roth and Bengt Holmström have won in prior years. So now I have a trio of former students who have won Nobel Prizes. So that’s a great joy.

Craig: And you get to bring one home for yourself.