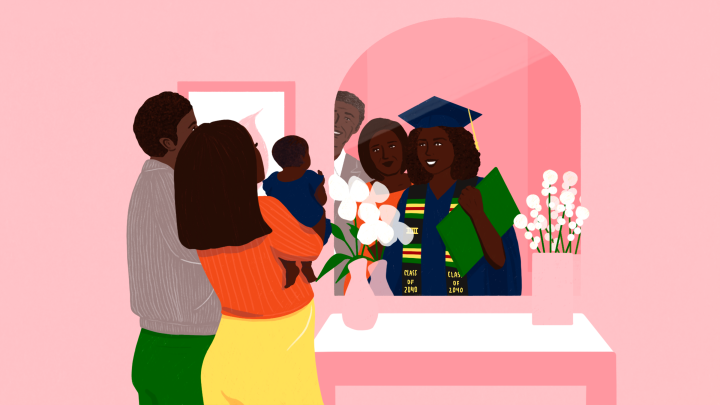 If you’re overwhelmed by the prospect of saving for college for your kids, you’re not alone. A third of people are afraid they won’t be able to afford to send their kids to college, according to the most recent Marketplace-Edison Research Poll. That number is even higher among younger generations; closer to 60% for those between 18 and 34.

For parents who are in a position to save — 60% say they are currently saving for college for their children — it’s easy to tell if you’ve saved enough, according to Mark Kantrowitz, publisher of the online resource Saving for College.

For those for whom that’s unrealistic, he added, saving even a little is still worthwhile. “Every dollar you save is a dollar less you’re going to have to borrow.”

Most families ultimately end up covering just over 40% of college costs with a combination of savings and income, and cobbling together the rest from other sources, like scholarships, grants and loans, according to a recent national study by Ipsos and Sallie Mae.

Around 75% of parents and students say they’re willing to do what it takes to pay for college, even if it’s a stretch. That’s what we heard, too, from parents around the country.

Louis Diaz was the first one in his family to finish high school, the first one to go to college and the first one to get a master’s degree, an MBA. “It really changed the income possibilities for me and my life,” he said. “And I knew that I wanted that for my kids, too.”

When his kids were young, he started saving whatever he could for college for them. Even if all he had left over after paying his bills was $10 or $15, he tried to put a little away every month. “As time went on, that really started to add up,” he said.

Last year, his oldest son started college and made his very first withdrawal from the college fund Diaz started for him all those years ago.

“It was great,” Diaz said. “After all this time, walking up to the counter and being able to help him out, when I saw other parents having some pretty uncomfortable conversations on the sidelines, was a pretty good feeling.”

Diaz learned about California’s 529 plan, Scholarshare, from a packet he and his then-wife got from the hospital when their son was born.

Diaz now has 529s for each of his kids, and is trying to balance how best to save for all five.

“I make it like a bill,” he said. “They say pay yourself first, so I make it a bill. You know, there’s a line item in our budget, and we’re pretty good about a monthly budget, and it says Scholarshare. And it just gets taken automatically each month.”

By the time his oldest son started college last year, the account had around $6,000 in it. “He’s going the community college and state college route, so for him it’ll make a big difference,” Diaz said. “It’ll at least be able to take a few things off his plate. You know, buying books, parking, maybe the tuition for the community college.”

Diaz fully expects his son will ultimately need to take out some loans to finish college, but “at the very least, those loans will be somewhat diminished,” he said.

Saving for college? No

Max Scroggs Jr. and his wife have always wanted to save for college, but they’ve never quite been able to make it happen.

“We’ve made attempts in the past to do it, but it’s always seemed to be an issue of something else came up that was more pressing at the time that needed to be tackled.”

His wife, who is a teacher’s assistant at an elementary school, lost her job during the recession, and for five or six years they were getting by just on Scroggs Jr.’s income. At the time, he was working as a salesman and supervisor at the local Coke distributor.

“You pay the bills that need to get paid, at that point,” he said. “There never seemed to be enough disposable income after everything was paid that there was enough to try to set aside.”

During those years, things were so tight that they sometimes got by putting things on credit cards. They own their house, so were able to pay off some of the credit card debt by refinancing their mortgage, but not all of it. They’re still paying the rest down, along with some lingering medical debt. And now, they’re taking on more debt in the form of PLUS loans to help put their daughter through college at DePaul University in Chicago.

DePaul is private, so even though their daughter got a good amount of scholarship money, they’re still taking out about $20,000 a year to make up the difference.

For many years, Tanyka Wilson was just making ends meet. She graduated from law school just before the Great Recession, six figures in debt, into one of the worst job markets in recent memory.

“It was very much a survival position,” she said.

She had some savings — enough to get her through a month or two, until she found her next gig — but not a whole lot more than that. Definitely not enough for a college fund for her son, whom she was raising on her own while also caring for her aging parents.

Finally, though, two years ago, Wilson landed a permanent job as a staff attorney at a law firm. One of the first things she thought was: “I have to start saving for college.” But she said she also remembered the financial coach Suze Orman’s suggestion: save for retirement first.

“Which is jarring to me as a parent,” Wilson said. “Also just culturally because, you know, you’re supposed to provide for your kids.”

Her own parents weren’t financially sound in their retirement years, though, and Wilson had found herself having to care for them. She didn’t want to do that to her son, so she started contributing to her 401(k) first. A couple months ago, she got to a place where she was ready to open a 529 plan.

She’s now putting $50 a month into that account, and any money her son gets for his birthday or holidays will go in there, too.

When Wilson thinks about what college will likely cost in eight or nine years, when it’s time for her son to go, she finds it daunting.

“Honestly, this is kinda sad, but in this country you just have to deal with debt,” she said. “This whole, ‘I don’t want my kid to have debt,’ it’s not really feasible. It’s not really realistic.”

Family: Married with twin daughters, 3, and a 5-year-old

Nick Enz and his wife started saving for college before their oldest daughter turned 1. They opened a 529, because they’d heard about the tax benefits, and set up automatic payments. At first they were putting in $40 or $50 a month, but they try to bump it up a little with every birthday. When their twins were born, two years later, they opened two more accounts.

At this point, they’re up to about $75 a month for each of the twins and about $85 a month for their older daughter. Deciding how much to put into the 529s every month was kind of arbitrary, Enz said.

“Basically it’s kind of what we have left, what we’re able to do, after all of our other expenses are accounted for, and we’ve put money into our retirement accounts as well.”

“I have looked to see how much, if we continue to invest at this rate, we’ll have, assuming a 5% return or something like that, by the time they’re ready for college … and it’s clearly not enough,” he said. “Once they get out of daycare, we’ll be in a position to put significantly more in.”

Daycare is their biggest expense. For the three girls, they’re paying more than $3,000 a month. It’s a lot, but not as much as it could be in the D.C. area, Enz said. Still, that, plus a mortgage, plus trying to save for retirement doesn’t leave a lot left over.

Talking to family and friends, especially around D.C., he gets the sense that a lot of people, even those with good jobs, don’t feel like they’re able to save very much. Like a friend of his in the foreign service, who’s usually based overseas with her family but also sometimes does stints in D.C.

“She was saying, ‘While we’re in Washington, I don’t even bother putting money in our 529 accounts because we just have too many other expenses here, it’s too expensive to live,’” Enz said.

Saving for college? No

The first thing Bree Zumoff-Mosley does when she wakes up every morning is pick up her phone and look at her checking account to make sure it’s not negative.

“So I start my day being worried about money, and it kind of stays there all day long.”

There are the student loans that she’s still paying off, 12 years later, even though she worked her way through college. There’s her husband’s tuition at the local community college, where he’s currently working toward his associate’s degree. There’s rent, day care, after-school care, groceries and so many other things.

Money is a “constant concern,” she said. “And I budget heavily, and I’m always looking for the best deal, never paying full price for anything.”

The family has a small emergency fund, maybe a month or so of expenses, but “it seems like it’s always dwindling, so we’re always chasing to get back in there so that we can cover unexpected expenses.”

Like having a baby last year, which was a surprise. As was that baby needing tubes in her ears, as was their son breaking his arm falling from a trampoline. Even though they have health insurance, they quickly racked up around $8,000 in medical debt, much of which they’re still paying off. They have credit card debt, too.

So right now it doesn’t feel like there’s much left over to save for college for their three kids, even though they’ve been thinking about it ever since their eldest was born in 2011.

“That was the year that I didn’t have a job to go back to after maternity leave,” Zumoff-Mosley said. “And my husband works in automotive, so they took a huge hit during the recession. And it’s just been a chase ever since.”

They lost their house in the recession, too, along with most of Zumoff-Mosley’s small retirement fund. Because of that, the idea of saving for their kids’ college in a 529, or any kind of account that’s invested in the stock market, freaks her out. “We’re kind of shell-shocked, I think, like a lot of people from the financial crisis.”

Even though it’s a constant struggle, she doesn’t feel alone. In fact, she and her friends joke that they’re living the new American dream.

How are you saving for your kids’ education? Share your story using the form below.