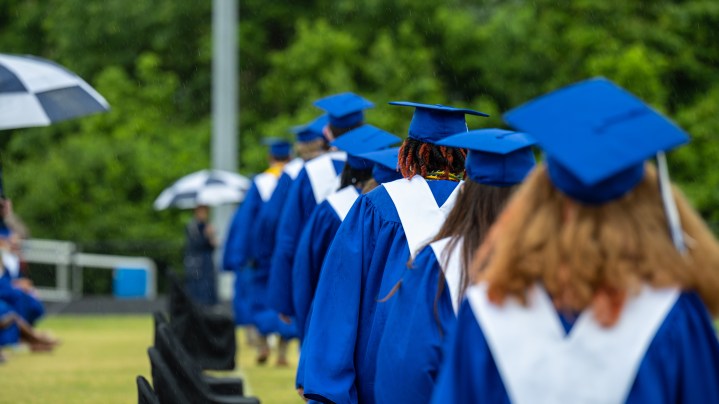 COPY
"Higher education is still probably one of the strongest predictors of financial security and stability within our society," said Fenaba Addo, an associate professor at UNC Chapel Hill. Jon Cherry/Getty Images

"Higher education is still probably one of the strongest predictors of financial security and stability within our society," said Fenaba Addo, an associate professor at UNC Chapel Hill. Jon Cherry/Getty Images
Listen Now

About 70% of Americans under the age of 41 who have student debt say they’ve delayed at least one major financial decision because of it, according to a new study from Bankrate.

But nearly 60% say they feel the education their student loans bought improved their career and earning potential.

The most common thing people with student loans have put off doing is saving for emergencies and retirement. Also on the list? Buying a house, getting married and having kids.

“It makes sense, you know. The average student loan payment is about $400 a month,” said Naomi Zewde, a professor at the City University of New York. “That’s the money that they would have spent to take whatever is the next financial step they would have taken. So, you know, that displaces a lot of disposable income, especially in the beginning of your career.”

Putting off big financial moves because of student loans is more common for younger people, for people living in the Northeast and the West, and for Black people — largely because of the racial wealth gap, according to Fenaba Addo, an associate professor of public policy at UNC Chapel Hill.

“Black borrowers are much more likely to accumulate more debt, graduate with debt and Black borrowers have higher rates of default and delinquency, so struggle with repayment quite a bit,” she said.

But even those who are putting off big things, like saving or buying a house, still feel — for the most part — that going to school was worth it.

About 60% say they wish they’d done something differently, like worked more while in school, found scholarships or gone to a cheaper college. But just 10% say that, in hindsight, they wouldn’t have gone at all.

Addo said that makes sense. “Higher education is still probably one of the strongest predictors of financial security and stability within our society.”

So even though the financial risks and drawbacks of going to college and graduate school have gone up, most people still feel it’s worth it when they do the cost-benefit analysis.

There’s a lot of evidence that it is, said Greg McBride, chief financial analyst at Bankrate.

“The unemployment rate for college graduates is half those that didn’t go to college. There’s a lifetime earnings premium of nearly a million dollars for those that get a college degree,” he said. “So there are very definitely some long-term benefits.”

But, he added that they come at a short-term cost.