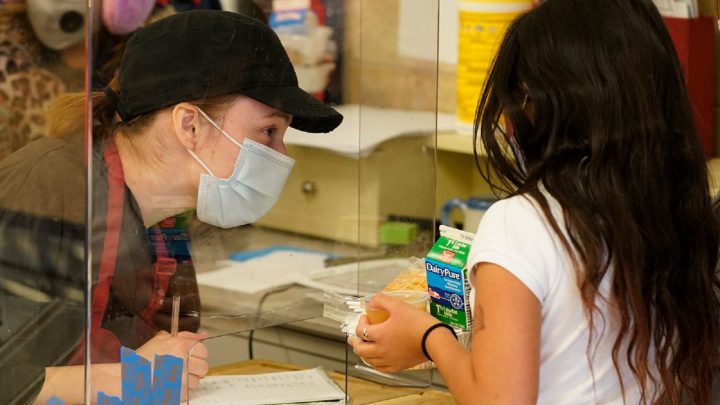 COPY
It's not just cafeteria workers who are in short supply; there's also a shortage of warehouse workers and truck drivers. George Frey/AFP via Getty Images

It's not just cafeteria workers who are in short supply; there's also a shortage of warehouse workers and truck drivers. George Frey/AFP via Getty Images
Listen Now

There’s a lot on the minds of school leaders as kids head back to school: school safety, debates around masking, how to help kids catch up academically if they have fallen behind. But that’s not all. As a result of the labor shortage and widespread supply chain issues caused by the pandemic, school leaders are also worried about how they’re going to feed kids in their cafeterias.

In Jefferson County, Colorado, school has already started. Beth Wallace is the executive director of food and nutrition services for the district.

“We are experiencing things we have never experienced before … we typically have 450 employees, and our vacancies are currently running at about 98 employees,” Wallace said.

She said the district raised the wages of school cafeteria workers from $12.48 an hour to $15 an hour. People still haven’t been coming back to work.

Figuring out what to serve kids has become a challenge. This year, students will be receiving fewer meal choices.

“Our high schools might have had six or seven options. And this year they might be lucky to get two of those options. And by the way, whatever we have printed with those menus may have to change on the spot because of delivery of products not arriving,” Wallace said.

There’s a similar story at Plymouth-Canton schools in Michigan. Kristen Hennessey is the director of food and nutrition services there. She’s tried to get creative in recruiting staff. When school employees go to restaurants and meet servers and other workers who seem talented, she has asked them to hand out business cards with a QR code that links to an application with the school district.

“Well, there’s a labor shortage, of course, like everyone, and that’s kind of what I told my staff. … I said, we aren’t alone in this. Everyone is having to alter how they do business, and so we’re not an island by ourselves,” Hennessey said.

Nationwide, the School Nutrition Association said public school cafeterias served more than 29 million students before the pandemic. This year, as more students return to in-person classes, the search for staff to cook and serve meals is a challenge nationwide.

“The labor shortage has become really quite a crisis point for many of us in school nutrition, particularly in these large urban districts,” said Katie Wilson, executive director of the Urban School Food Alliance, a group that represents food service professionals in the nation’s largest school districts. “Many of our districts are looking for [200] to 300 employees in their school nutrition programs alone.”

And she said the labor shortage doesn’t end at the cafeteria door.

Shortages are driving up prices

And the shortages, combined with demand, are driving up prices. Wilson said she’s heard of school districts where costs have risen anywhere from 7% to 30% this year. Many school districts also have fewer options for cooking food on site. While food that’s prepackaged and cooked off-site may meet nutritional requirements, she said it won’t be as fresh as food cooked at a school.

“Buying more local product, processing our own foods and preparing our own foods, that takes labor. It’s easy to buy something in a package and heat it up and serve it, but we don’t want to do that,” Wilson said.