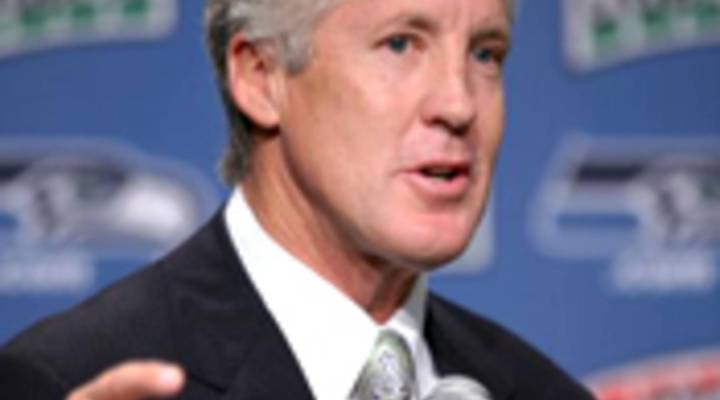 The era of the mercenary college coach

The era of the mercenary college coach

Bill Radke: In the football world, the talk is about the Saints-Colts Super Bowl and the college coach merry-go-round. Ethan Lindsey reports money has been trumping tradition.

Ethan Lindsey: Fans were shocked when head coach Pete Carroll announced he was leaving the University of Southern California.

Soon after, USC lured Lane Kiffin to Los Angeles with a $4 million a year contract. Problem is Kiffin was the head coach at the University of Tennessee — a job he’d held for just 14 months.

Lane Kiffin: Um, it was very hard on me, and it was a hard decision for us. I don’t think there’s another job I would have left for.

And these coaching changes aren’t just about the guys at the top. College coaches bring recruits, alumni donations, and ticket sales. So when a coach leaves, it can leave a program in shambles.

Clay Travis: We entered what I call the mercenary era, where you go out and get your guys who are not familiar at all with your program, but are very good at what they do.

Clay Travis is a college football writer living in Nashville. He says in 2008, Tennessee jumped on that coach-for-hire bandwagon, firing longtime coach and Tennessee native Phil Fulmer and replacing him with Kiffin, who had no ties to the state.

Travis: I think that the Lane Kiffin hiring will give, will make a lot of athletic directors predisposed to at least a consideration of “How does this coach fit our culture?”

Travis says take for example who Tennessee hired to replace Kiffin. His name’s Derek Dooley. He’s from the south, and the son of Vince Dooley, the legendary Georgia football coach.

At the USC bookstore in L.A., Pete Carroll’s picture is everywhere. But Carroll is now collecting a $7 million-dollar paycheck from the NFL’s Seattle Seahawks.

So having been bitten by the mercenary bug themselves, are USC fans worried about their new hire? Not one bit, says Scheyler Smith, a USC grad student.

Scheyler Smith: This was his dream job, and I don’t think that this chance would have come again for him. For me, as a fan, I think it’s a great choice because he’s young.

Most of Smith’s family went to the University of Tennessee, but she has no regrets about stealing their coach. And that may be exactly why the mercenary coach will continue to ply his trade for the foreseeable future.