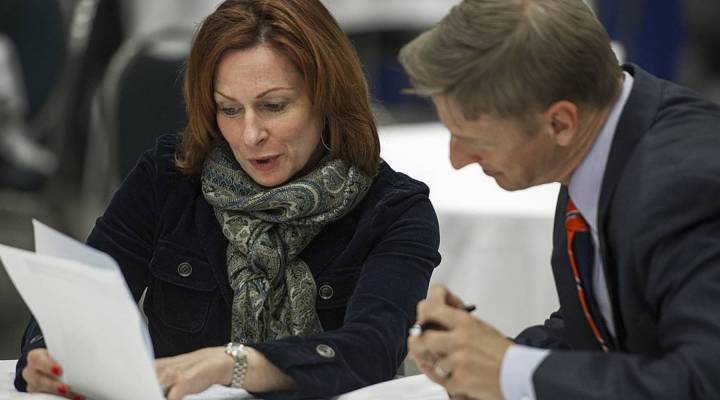 Maybe you or someone you know has a coach — and we’re not talking sports here, we’re talking about that person who helps you bring your best performance at work, and in life. If so, you’re not alone.

In the last ten years the coaching industry has exploded. Membership of the International Coach Federation has more than tripled. A report by the market research firm IBISWorld at the end of 2014 said coaching is a $1 billion industry in the U.S. alone.

Noel Theodosiou runs her own business in Boston. She’s been working with a leadership coach for several years. She and her coach, Debbie Tyson, met recently to discuss various aspects of the business. Tyson prodded Theodosiou to tackle a looming item on her to-do list: resourcing the business. Theodosiou let out a sigh, and Tyson suggested they start with ‘a brain dump’ to get things going.

Theodosiou works alone. She said it’s easy to get bogged down by negative thoughts or spend too much time on certain tasks. She said that’s where a coach helps.

“I would attribute a lot of my success to the way coaching has changed my perspective,” she said, “and made some things easier and made me prioritize my emotional energy and my time.”

It’s not just entrepreneurs who are hiring coaches. The corporate sector is also fueling the industry’s growth. It uses coaches to develop both executives and promising up-and-comers.

Magdalena Mook is CEO of the International Coach Federation. She said a decade ago, “It was almost a little bit of a quiet conversation: ‘Oh, I’m not going to tell anybody I have a coach because that means that I have a problem.’”

But all that has changed. These days, she said, “Having a coach is almost a badge of honor.” That’s because it means the organization is investing in your future.

The coaching industry isn’t regulated. Coaches can train at a coaching institute, or not at all. These days, a lot of universities teach coaching. Mook said that adds credibility to something that can still sound a bit woo-woo to some people.

“It means that coaching can be a viable profession because there are degrees offered in that field.”

There’s certainly no shortage of aspiring coaches. Terry Maltbia is faculty director of the Columbia Coaching Program at Teacher’s College, Columbia University. The course fills up within days.

And the business side can be tough. Coaches are self-employed. Executive coaches can charge hundreds of dollars an hour. Still, according to the International Coach Federation’s latest figures, the average coach salary in the US is about $50,000 a year.

Completing Columbia’s Coaching Certificate Program costs more than $19,000. Maltbia said that qualification gives coaches an edge in a competitive landscape. “The demand for coaching is increasing compared to when I entered this field, in, say, 2006,” he said. “But the supply of coaches both trained and untrained is actually higher than that.”

There are a lot of coaches looking for work.

Noel Theodosiou found her coach through a recommendation. And she said the right coach can boost your performance. “It’s one thing to change your behavior, it’s another thing to see that the result of all your effort translates into good outcomes.”

Her business has tripled in the last two-and-a-half years.