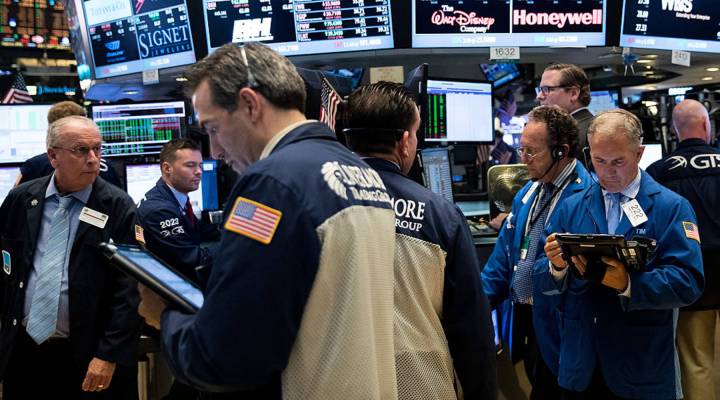 Imagine for a minute your job involves trading or investing millions — maybe hundreds of millions of dollars — and the stress and professional anxiety that goes along with that.

You’re under incredible pressure, all the time. Which is why increasing numbers of traders are turning to performance coaches.

Take John Netto. He had early aspirations to be a trader — he says he knew exactly what he wanted to do after he saw the movie “Wall Street” at the age of 12.

He got his wish in the late ‘90s, after being in the Marines for almost a decade. But he had a problem. He was trading for himself, and he wasn’t pulling in enough money.

He was not. So he sought out a performance coach and he thought this coach would work on his trading strategy. Instead, she asked about his feelings as he moved in and out of trading positions and about his childhood.

Netto’s dad had been all about academic achievement and Netto barely graduated high school. He said he came to realize his dad’s disappointment was affecting his trades.

“If I don’t believe I’m truly intelligent how can I believe that I have an edge in the market?” he said.

He said making that connection was the start of a turnaround.

Denise Shull, his first coach, is a former trader herself. She also has a master’s in neuroscience and psychoanalytic theory. She said there’s always an underlying reason for trading behavior. Take a guy she coached several years ago.

“He came because he lost money every morning, then made it back and was profitable – but had been doing this for years,” she said. “And he goes, ‘You know it makes no sense, why do I have to start every morning down?’”

It turns out that when he was a kid, his family had barely scraped by. In his teens, he got a running coach, did really well, and began to climb out of poverty. She said he was repeating his life’s story in a day’s trades.

“In fact the next month after we put that two and two together if you will, he made more than three times what he’d ever made in one single month,” she said.

And he kept it up.

Shull has been so successful the makers of the recent Showtime hedge fund drama, “Billions,” sought her out for advice.

In one scene from the show, a trader slumps down in front of his coach. He says he’s lost his mojo. After a few questions, the coach gets him to stand up and repeat the figure he brought in last year.

That figure is $7.2 million. The coach gets the trader to repeat it again.

“That I’m awesome!” the trader replies.

“There you go,” she said. “And what does it have to say to that loud, critical voice?”

His response can’t be printed.

Like that fictional coach, psychologist and performance coach Alden Cass said he meets those macho traders where they are. He has them practice what he calls bullish thinking.

“We help them identify their irrational, bearish thoughts that are self-defeating in nature,” he said. “All or nothing thoughts like, ‘this bad trade will now ruin me for the month, I’m now going to be wiped out for the year. All my gains are lost, I’ll never come back from this.’”

He uses sports analogies to get clients to forget that last, haunting trade, like “just throw the ball as hard as you can.”

“If it’s there, and you believe in it, and you have high conviction,” he said, “go for it, and let it ride. You really have to really believe in yourself.”

Trader John Netto agrees self-belief is vital to success. In a way he wishes more traders and portfolio managers had coaching – just not right now.

“I support this and I believe everyone should do it,” he said. “But the longer people take to adopt these types of protocols and procedures, paradoxically, the more beneficial it is to me and my business.”

Because, he said, until then, he has an edge in the market.