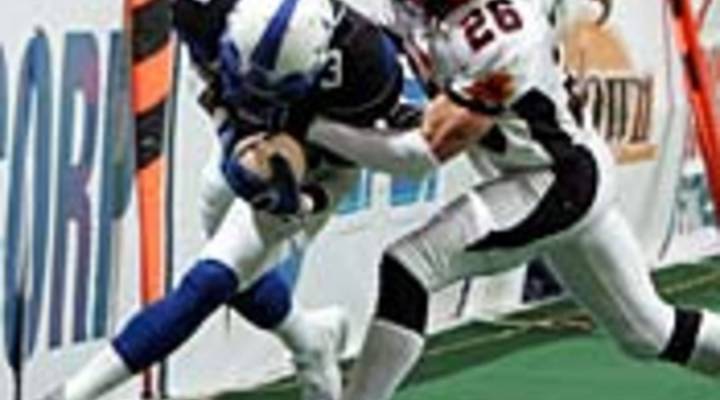 Even sports leagues are in the red zone

COPY
Will Houlder of the New York Dragons tackles Will Pettis of the Dallas Desperados during an Arena Football League game in 2007. Jim McIsaac/Getty Images

Even sports leagues are in the red zone

Will Houlder of the New York Dragons tackles Will Pettis of the Dallas Desperados during an Arena Football League game in 2007. Jim McIsaac/Getty Images
Listen Now

Tess Vigeland: If you’re looking to take your mind off of things like unemployment, plunging home prices, Ponzi schemes, how about a trip to the stadium? Or, the arena? Sports have been generally immune from economic downturns, but not this time. Even major leagues, including the NFL and NBA have had layoffs. And the situation is even worse for lower-level sports. The Arena Football League announced this week that it’s suspending the 2009 season. Business Week sports editor Mark Hyman is with us. Welcome to the program.

Vigeland: So, what happened to the Arena Football League?

Vigeland: How much of this is potentially related to the recession? Is this something where fans just decided they couldn’t afford to go to the games?

Hyman: I think, you know, part of it certainly is related to the economic meltdown, and the expectation that corporate sponsorship would be hurt and that attendance would be hurt, but not all of it. I think that the league, for some time, has been looking to restructure and to come back as a single entity league where ownership would be centralized and that eliminates competition among teams for player salaries and reduces payroll.

Vigeland: Does this mean that the AFL won’t be coming back? I mean, is a hiatus a de facto bye-bye?

Hyman: That’s a good question. I mean, the league is talking as if it certainly will be back in 2010, but we know from history that that’s now always the case. In 1986 the U.S. Football League took a year off with the expectation, and certainly telling people that they would be back the following year, and there’s never been another U.S. Football League game.

Vigeland: Well Mark, I wonder. You know the AFL is not the only league that is suffering right now. The WNBA in a bit of trouble and the LPGA I know has cancelled several tournaments this year.

Hyman: Yeah. I mean, we’re seeing a contraction in many of these second-tier sports. The WNBA is going to be entering it’s 13th season starting in May, and recently they lost their most prominent franchise in the league, the Houston Commets, who won the first four WNBA titles, leaving the WMBA with 13 leagues for 2009. But, you know, the WNBA is a slightly different case; they’re kind of tethered to the NBA and without the resources of the NBA the WNBA probably wouldn’t be here.

Vigeland: Well, when we look at the recession’s effect on some of these non-major sports, any silver lining you can see?

Hyman: Well, yes. I think there are some sports that are going to benefit from this, some professional leagues. For instance, minor league baseball potentially could be a big winner, largely because it’s a much more affordable option. You can buy a ticket that allows you to see the field for less than $50. That’s a pretty good deal. I was just on the website for the Aberdeen IronBirds ? the franchise nearest to me in Baltimore ? and you can buy a season ticket for 38 games for $380, and a lot of people who are interested in professional baseball are going to find that a pretty good option this summer.

Vigeland: Mark Hyman is contributing editor for sport at Business Week, and also the author of the forthcoming book “Until it Hurts: America’s Obsession with Youth Sports and How it Harms our Kids.” Thanks so much.