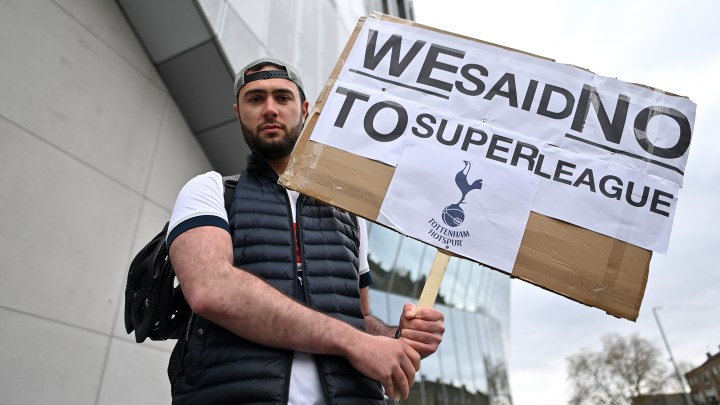 COPY
When it comes to soccer, a.k.a. "the beautiful game," don't mess with the fans. Justin Setterfield/Getty Images

When it comes to soccer, a.k.a. "the beautiful game," don't mess with the fans. Justin Setterfield/Getty Images
Listen Now

European fans have been in a whirlwind of emotions for the last few days about a proposed European superleague, which would have had the biggest, most successful teams play each other exclusively.

FIFA, soccer’s governing body, objected, fans took to the street to protest and the whole thing got called off.

European soccer has a pyramid system: There are different levels or leagues, and any team can climb up or down in the ranking.

The Super League would have changed that.

Chris Bowerbank, one of the hosts of the English soccer podcast “Across the Pond,” said it would be as if “the NCAA said ‘Hey, you know what? We’re gonna have a superconference, were gonna take Alabama football, Ohio State football, and only those teams can compete for a national championship.’”

In fact, it would have Americanized European soccer.

Pat Nevin, who used to play for Chelsea (one of the proposed Super League teams), points out that baseball and American football are franchises. “And it doesn’t matter how bad a season you are, you’re still in the league next season. That is not the case in Europe. And it’s something that in Europe we hold dear to our hearts.”

Having the same popular teams in a league every year would have meant a lot more money for some, said Andy Zimbalist, a sports economist at Smith College.

“There would be more following, more traditional rivalries. And that as a result of that, they would get larger television contracts,” he said

Zimbalist and others say a lot of these clubs are owned by foreign billionaires, including Americans, who don’t entirely understand the culture of soccer, especially this:

When it comes to what’s known as “the beautiful game,” don’t mess with the fans.