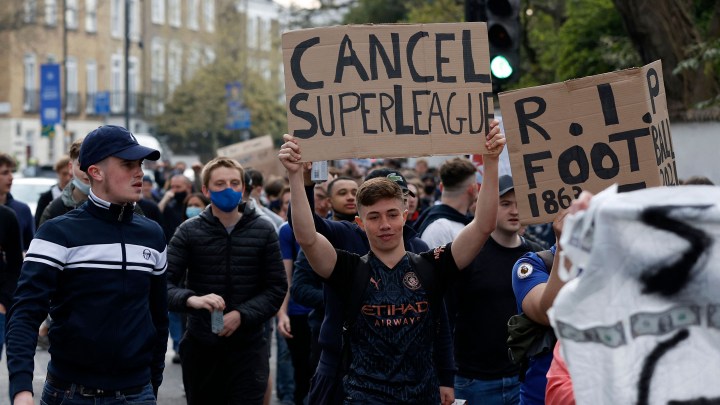 COPY
Soccer supporters demonstrate against the proposed European Super League outside of Stamford Bridge football stadium in London on April 20, 2021, ahead of the English Premier League match between Chelsea and Brighton and Hove Albion. Adrian Dennis/AFP via Getty Images

Soccer supporters demonstrate against the proposed European Super League outside of Stamford Bridge football stadium in London on April 20, 2021, ahead of the English Premier League match between Chelsea and Brighton and Hove Albion. Adrian Dennis/AFP via Getty Images
Listen Now

A new Super League for elite soccer teams in Europe announced just last weekend has abruptly fallen apart. Twelve teams from England, Italy and Spain came together in a multibillion dollar attempt to rival Europe’s existing Champions League. But a tidal wave of outrage from fans, former players, heads of state and even British royalty put a stop to the scheme.

Passion for soccer runs deep in Europe, so there’s been no stiff upper lip over dissatisfaction of the breakaway league’s formation, which would adopt a more American-style format.

Traditionally, teams are added or subtracted from European leagues based on how well they perform during the season. Under the Super League format, though, clubs would be added permanently and not face the possibility of relegation. Founding clubs were promised a share of a more than $4 billion grant, backed by Wall Street titan JPMorgan Chase.

It was an attractive offer considering the COVID-19 pandemic worsened many teams’ financial positions. Having a guaranteed place in a major European soccer competition each year would provide more stability for superstar players on multimillion dollar salaries.

But after after widespread condemnation for putting profit over the good of the game, all six English teams have backed out of the plan. Now, the league says it’s considering how to move forward.