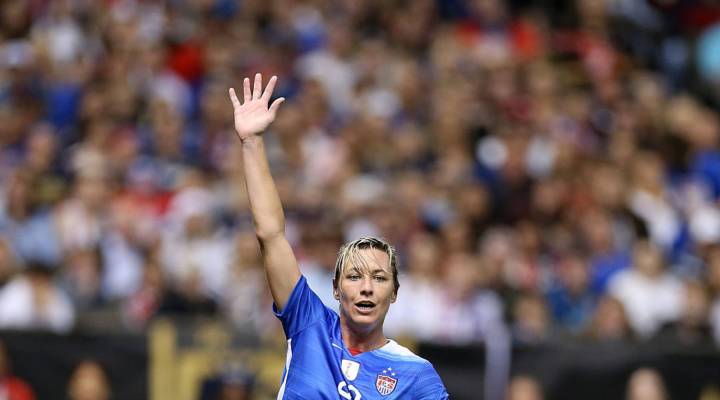 COPY
Abby Wambach of the United States reacts during the women's soccer match against China at the Mercedes-Benz Superdome in New Orleans, Louisiana.  Chris Graythen/Getty Images

After playing soccer for the University of Florida, and basically her entire childhood, Abby Wambach spent 14 years leading the U.S. women’s national soccer team to Olympic and World Cup victories. Wambach is a two-time Olympic gold medalist, FIFA Women’s World Cup champion, and six-time winner of the U.S. Soccer Athlete of the Year award. Throughout her career, Wambach made 254 international appearances and holds the world record for international goals scored – for both female and male soccer players – with 184 goals.

Wambach played her last international game in December 2015 and is now retired. She has a new memoir out called, “Forward.”

You know, our world cup final was the most watched—most televised game in this history of all soccer that’s ever been aired here.  And so, that was always the biggest argument laid against us when we went to the negotiating table with U.S. Soccer: ‘you guys just don’t bring in the dollars, you don’t bring in the money, you don’t bring in the corporate sponsorship to be able to justify us paying you guys more.’ And now we have this big stat that’s like, well this makes no sense.

The thing is that it’s no longer the ‘feel-good’ thing to invest in women’s sports, you know? Now it’s actually a smart investment, where you have a lot of viewership watching these games and so your advertising dollars are actually being spent in the right way, in an economical way. So, the thing that the women want is just to be compensated for it.

[Artificial turf] is a lesser surface, it’s more economical for, not just U.S. Soccer but for FIFA. FIFA mandated that we play on the field turf for the World Cup in Canada in 2015. But we’ve taken up enough fight with U.S. Soccer that I think that they’re making sure that the games that they play on are going to, at the very least, be surfaces that aren’t going to jeopardize the health of the players that are playing on it.

If [people] looked at how U.S. Soccer pays each player, most people on the planet would be like ‘well, that’s a healthy living,’ right? But we don’t get a 401K, our bodies are the only capacity in which most of us could make and earn our living. So there’s so many different factors that are at play here that these women deserve to get paid. And it’s not more or less than the men, we just want equal treatment.