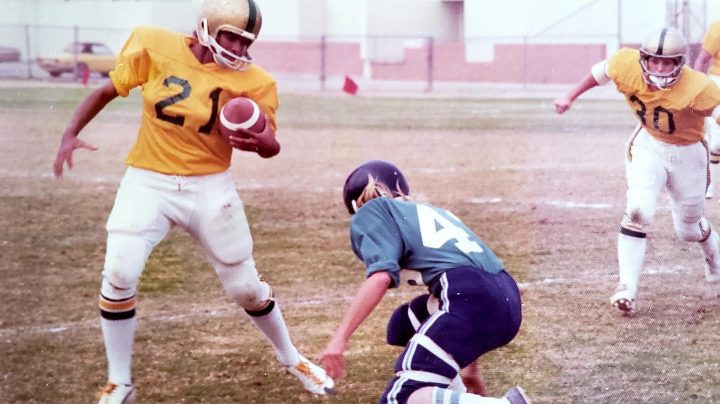 COPY
The National Women’s Football League started in 1974 and folded in 1988. Above, a scene from a game between the Dallas Bluebonnets and the Los Angeles Dandelions. Photo provided by Joyce Johnson of the L.A. Dandelions
Shelf Life

The National Women’s Football League started in 1974 and folded in 1988. Above, a scene from a game between the Dallas Bluebonnets and the Los Angeles Dandelions. Photo provided by Joyce Johnson of the L.A. Dandelions
Listen Now

Half a million people tuned in to CBS last month to watch the 2021 National Women’s Soccer League championship match. The league said the game was its most-watched finale on record.

While there is still a lot of distance between the NWSL’s viewership numbers and the fame and financial support enjoyed by professional men’s sports leagues such as the NFL and the NBA, women’s professional athletics have come a long way.

In a new book called “Hail Mary: The Rise and Fall of the National Women’s Football League,” sportswriters Britni de la Cretaz and Lyndsey D’Arcangelo tell the stories of the first female professional American football players in the U.S.

“The women who played in the NWFL were incredible,” D’Arcangelo told “Marketplace.” “They did it simply for the love of the sport.”

When the NWFL’s first official season kicked off in 1974, it was the only professional sports league for women in the U.S.

“Some teams that had owners would get paid 25 bucks a game,” D’Arcangelo said. “Other teams that were started by women and run by women themselves and had to raise their own money through car washes, making bumper stickers and things of that nature, had barely enough money to go from game to game.”

The seeds of the NWFL were planted in 1967, when an entrepreneur named Sid Friedman launched a professional women’s football team called the Cleveland Daredevils.

“The whole thought behind it was to create something like the Harlem Globetrotters, where they would travel as a troupe to different cities around the Rust Belt area and compete against men’s teams,” D’Arcangelo said. “From there, what he realized was that the women could actually play, and play well.”

When it launched, the league had half a dozen teams scattered around the country from the Rust Belt to Texas and California, with a diverse group of players from different backgrounds.

“Just think of this melting pot of women who had this one singular goal: to get the opportunity to play football, and they took it,” D’Arcangelo said.

After the media attention garnered by the novelty of women playing professional football faded, the NWFL folded. That was 1988. “But you also have to remember that these sports departments in these papers at the time were run by men,” D’Arcangelo said. “They deemed what was worthwhile to cover, and women’s football was not one of those things.”

Despite that, D’Arcangelo said, the legacy of the women who played in the NWFL lives on in today’s professional women’s leagues.

“The WNBA and the National Women’s Soccer League and other leagues that are trying to get established — I see the roots of that in the NWFL,” she said. “They did it first. They broke down that barrier in a big way … and it deserved to be remembered and recognized.”