RNC: View from the bike lane (Part I)

RNC: View from the bike lane (Part I)

Yesterday, I devoted my day to checking out what the RNC means for the Twin Cities. As an admitted urban cycling fan, I wanted to look out over handlebars to see how the freewheel!n borrow-a-bike-free program is working – and to see if I, or delegates, or anyone else could really use it as a way to get around Minneapolis and Saint Paul. As the Freewheel!n website says, “why wouldn’t you choose to pedal your way the 4 or 6 blocks from your hotel to the convention center, or from the light rail stop to your office or, well, anywhere else?”

My plan was to try out bikes at stations in both Minneapolis and Saint Paul to see whether bikes were being used, and just how user-friendly the program is.

I had high hopes and significant concerns about whether or not this pilot would prove as successful as in Denver.

My hope comes from seeing so many cyclists in cities like Copenhagen and Amsterdam wearing suits, getting to work, hauling kids, and grocery shopping. The program sounds really cool. Freewheel!n provides bikes, helmets, locks, directions, towels, water, and anything else you might need for your ride – all for free. Plus, Humana is donating $10 to Gustav relief for every mile ridden during the RNC.

My concerns arose the instant I saw the map of where the stations were going to be located.

In Minneapolis, the locations seemed reasonable: a couple near hotels and the convention center (not the one hosting the RNC), and a couple on the edge of downtown in beautiful parks. They had the potential to get people to useful places as well as recreational ones.

But in Saint Paul, none of the stations is near anything useful. All are in beautiful locations along the Mississippi River — at the bottom of a the steep bluff. Downtown Saint Paul and all the RNC activities are at the top of the bluff. One station is directly below the convention center hosting the RNC but cut off by a security perimeter inside which bikes are banned, a second is several miles west of downtown, the third is to the east across a former industrial zone and a couple of highways. Why was no station put in downtown proper?

Given the challenge of events being located in two downtowns 12 miles apart, and this odd choice of locations, I wondered: was there any hope the Twin Cities could match the 5,555 rides taken during the DNC in Denver? Or match the approximately 26,000 miles a freewheel!n volunteer said were ridden?

Would it be possible to navigate a mostly-closed downtown Saint Paul? Would I get to see any RNC Welcoming Committee activities? 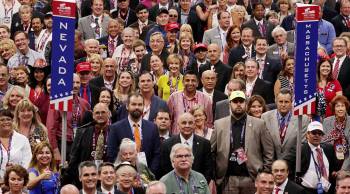 The top Google Trends question about the RNC is ‘What is the RNC?’