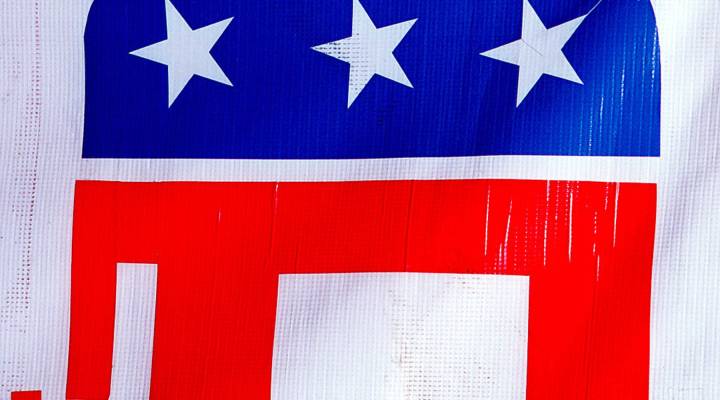 A GOP logo from 2000. The party has had trouble raising money from sponsors for its 2016 convention. Joe Raedle/Newsmakers

A GOP logo from 2000. The party has had trouble raising money from sponsors for its 2016 convention. Joe Raedle/Newsmakers

The tech company said it couldn’t reach an agreement for “an official partnership” with the RNC. It’s a contrast to the DNC, where Uber will provide VIP attendees the ability to order cars from a special shuttle service versus its usual pool of drivers. But, Uber said, it will still host parties and a lounge area for both conventions.

The scaled-back sponsorship from Uber is another indicator of the RNC’s changing relationship with companies this year. Several companies that sponsored the convention in 2012 are choosing not to participate, or are scaling back their presence. Some of these companies’ executives reportedly took issue with the party’s presumptive presidential nominee Donald Trump, including Hewlett Packard and Apple.

The snub from tech companies is particularly notable, given the party’s already poor relationship with the industry. It seems Silicon Valley’s leaders believe that the Democratic Party is more aligned with tech’s ethos of innovation. The industry is also more pro-government than the GOP, given that some of tech’s more notable developments, from the internet to robotics, started from government-funded programs.

In May, Gizmodo reported that Facebook was reportedly suppressing conservative news for its “Trending” topics feed.  While Facebook said it does not engage in the reported practice, the issue highlighted the GOP’s strained relationship with tech companies and their more liberal-minded leadership.

Here’s where some of these companies stand on their participation in the RNC this year:

Apple: The iPhone maker reportedly told GOP leaders that it won’t be funding or providing any technical support at the RNC because of Trump’s comments about minorities and immigrants.

Facebook: The social media company confirmed in May that its sponsorship will include a lounge at the convention.

Hewlett Packard: Historically, HP is a big supporter of the GOP, but the company’s CEO Meg Whitman, the 2010 Republican nominee for governor in California, has publicly criticized Trump for his statements about minitories. The company said it is withholding cash donations to both the RNC and the DNC this year.

Motorola: Motorola is another company that is withholding support for either convention. In 2012, the telecommunications company was the “Official Mission-Critical Radio Provider” for the RNC.

Microsoft: The software giant said it is only providing “software and technical assistance” for the RNC. In contrast, the company will provide funding, in addition to services, for the DNC.

Google: The tech giant is the RNC’s official livestream provider. In April, it declined to say whether it would make other contributions at the convention.