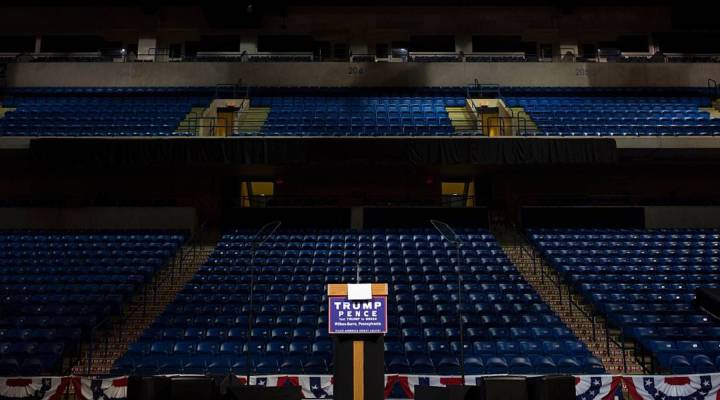 Monday was a day of scrambling for Republicans, who held emergency conference calls and meetings following the release of audio on Friday in which presidential candidate Donald Trump was heard disparaging women in vulgar terms in 2005. Various Republicans who once backed Trump are backing out of backing him, and on Monday GOP House Leader Paul Ryan stopped short of un-endorsing Trump, but said he won’t campaign for him. Despite rumors of a growing rift between the Republican National Committee and Trump, in a conference call Monday RNC chair Reince Preibus reportedly doubled down on support for the candidate.

In a Wall Street Journal/NBC survey over the weekend, a vast majority of voters said Trump’s comments in 2005 were either completely unacceptable, or inappropriate but typical. The survey, conducted before Sunday’s strange debate, found Trump trailed Clinton by 11 points in a four-way race.

As Trump plummets in the polls, Republicans further down the ballot are trying to figure out a strategy to hang on to their seats.

“We’re now at a point where it’s kind of every man for himself,” said Republican consultant Matt Mackowiak. He said it’s unprecedented for a party to be so divided over its own candidate, but the likely response will be to double down on House and Senate races, with or without Trump’s help.

“There’s a kind of panic setting in among Republicans,” said Robert Shrum, a politics professor at the University of Southern California and a longtime Democratic strategist. He said House and Senate candidates could actually see a bump from donors who abandon Trump and the RNC. “They will take all their money and pour it into congressional and Senate races.”

At the end of August the RNC had $40.5 million on hand, around half what it had at that time in 2012 or 2008. As a general rule, the committee works in concert with the candidate, and it’s pretty late in the game to think about shifting a strategy for how to spend that money. The RNC could shift the focus of its ground game towards contested congressional districts, but even so, Shrum says, it would not be likely trumpet that decision.

Trump’s latest fundraising numbers showed him with over $50 million on hand, and the Republican National Congressional Committee had around $64 million. Trump’s style of spending has stood out throughout the campaign in that he has built very little get-out-the-vote infrastructure or ground game, depending largely on the RNC for that key piece of strategy.

“I do think that she can use a lot of what Donald Trump said — it’s just locker-room talk, I don’t pay my taxes, I’m gonna send you to jail, this kind of bullying persona that he has …to raise money,” she said.

Clinton’s campaign has consistently out-fundraised Trump, although Trump has raked in the most free media coverage of any candidate in history.