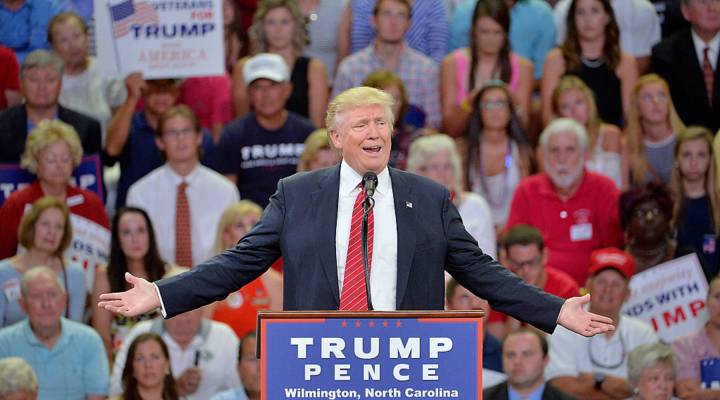 Donald Trump’s presidential campaign has had to spin plenty of controversial comments, but his latest was the first to attract the attention of the Secret Service.

The perception that Trump was inciting violence against his rival was bipartisan. The campaign has repeatedly said he was referring to gun advocates’ political power, and that the media is purposely misinterpreting the quip. Response from republicans, many of whom endorse Trump, has been varied:

“What you have is Donald Trump talking stream of conscious” @CLewandowski_ on Trump’s 2nd Amendment remarks https://t.co/FKyPbfENW0

Coming off a landslide primary win in Wisconsin, Speaker of the House Paul Ryan said repeatedly he hadn’t seen Trump’s remarks, only heard about them secondhand.

“It sounds like just a joke gone bad. I hope he clears it up very quickly,” Ryan said. “You should never joke about something like that.”

On “Morning Joe” Wednesday Morning New York Rep. Peter King renewed his support for Trump, but didn’t bother debating the candidate’s intent. Trump shouldn’t have made that “dumb remark,” King said, and he should clarify what he meant and move on.

Former New York mayor and Trump surrogate Rudy Giuliani made the morning show rounds too. On “Good Morning America” he bushed off the controversy, blaming the violent interpretation as a product of the “Clinton spin machine.”

“You know how speeches go. He was talking about how they have the power to keep her out of office,” Giuliani said, later adding: “With a crowd like that, if that’s what they thought he’d meant, they’d have gone wild.”

Retired General Michael Hayden, who headed the NSA under Presidents George W. Bush and Barack Obama, denounced the remark on CNN, saying it was dangerous no matter the intent.

Another retired Republican, former Senator Gordon Humphrey, said the comment was “the last straw.” In a letter to Republican National Committee officials, Humphrey pushed the party to replace Trump on the ticket.

Finally, there’s Mike Pence. Trump’s VP pick has done damage control several times since the RNC. Pence was holding a town hall meeting in Lancaster, Pennsylvania when Trump spoke. When he got off stage, a local news station read Trump’s comments back and asked if Pence thought his running mate was calling for violence.

“Of course not,” Pence said. “Donald Trump is urging people around this country to act consistent with their convictions in the course of this election, and people who cherish the Second Amendment have a very clear choice in this election.”