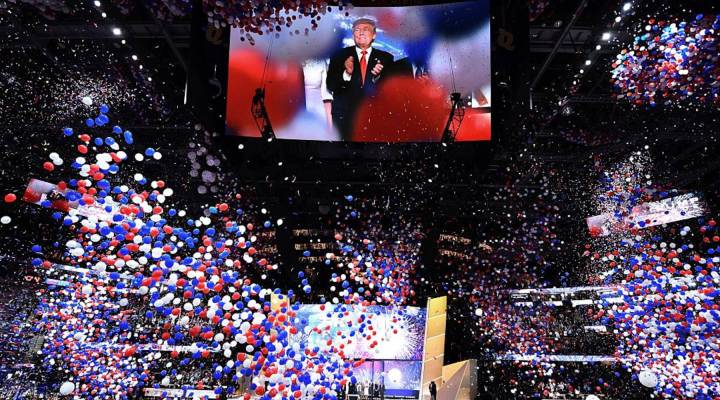 COPY
US Republican presidential candidate Donald Trump is seen onscreen at the closing of the Republican National Convention at the Quicken Loans Arena in Cleveland, Ohio on July 21, 2016. JIM WATSON/AFP/Getty Images

US Republican presidential candidate Donald Trump is seen onscreen at the closing of the Republican National Convention at the Quicken Loans Arena in Cleveland, Ohio on July 21, 2016. JIM WATSON/AFP/Getty Images
Listen Now

The Republican National Committee has had one of its worst fundraising months in recent years. There are many theories as to why: the candidate, the media, the donors, and more.

But no matter the reason, the truth is that the RNC is like any business; when there’s less money coming in, there’s less business it can do. That means fewer voter registration drives, fewer ads, and less staff support for the campaign of the party’s presidential nominee — this election, that’s Donald Trump.

“They’re just going to have less resources,” said Bob Biersack, a senior fellow at the Center for Responsive Politics.

Though the RNC raised more than $27 million in July, about a third of that can’t be used for campaigning. And the total is less than the RNC has raised in the same critical month of the last four presidential elections. That means it has less than half of the cash-on-hand than it did at this point in 2012.

According to Biersack, Republicans are “going to have to make some pretty cold, calculated judgments about where they have potential to be successful in November and,” he said, “states where they’re just not going to be competitive.”

The RNC will likely have less to spend state-level staff and voter outreach, both of which are expensive.

On CBS, Republican National Committee chair Reince Priebus said, “I need to know everything about a particular voter, how to move them, but then I need to make sure that I put in an absentee ballot or an early vote procedure in the hands of the people I need to vote.”

Another problem posed by low fundraising is this, according to Diana Dwyre of California State Univeristy, Chico: less money to spend on other Republican races.

“So given that Republicans are struggling to raise the kind of money that they usually raise for a presidential election at the RNC level-the national committee level, I doubt they’ll be getting too engaged in the house and senate races,” Dwyre said.

Though political parties in the House and Senate have their own fundraising committees, Republicans there are having a tough time raising money this election too.

“The Democrats are out-raising the Republicans,” said Dwyre, “which, if you had said that 15 years ago, I think people would have been shocked, but, the tables have turned a little bit.”

The challenge for the GOP, especially this late in the 2016 election season, is to find a way to stay competitive. Like any business, that could mean raising more money or using cheaper labor — which, in the parlance of politics, is called “campaign volunteers.”