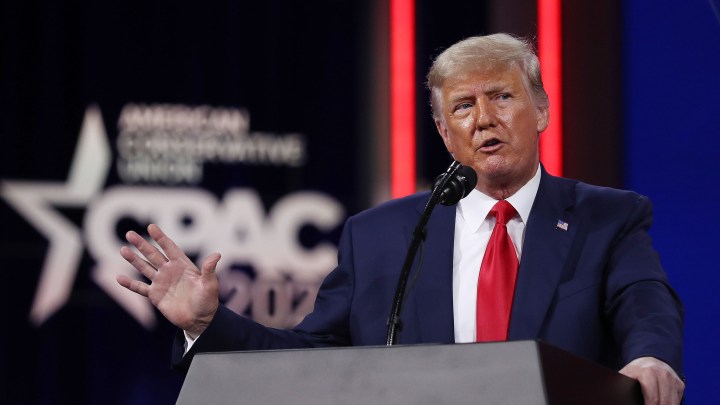 Taking to the stage for the first time since leaving office, former President Donald Trump on Sunday called for Republican unity at the Conservative Political Action Conference. He also dropped strong hints he might like to run for president again.

Trump may have been out of the spotlight for the past few months, but his role as a political fundraiser remains strong: He never stopped raising money.

He pulled in cash from donors to fight his election loss and, since then, “Trump launched a leadership PAC that raised over $30 million in just a matter of months,” said Karl Evers-Hillstrom, who monitors money and politics for OpenSecrets.org.

Evers-Hillstrom said politicians and groups who align themselves with Trump are benefitting, too.

“The Republican Party is increasingly reliant on Trump to actually raise money,” he said. “We’ve seen some corporate interests are not as interested in donating to them after the Capitol riot.”

Trump’s supporters, on the other hand, still seem game to donate to the president and his allies. There were even rumors after the election he might start a third political party. “What he’s done is actually a lot more interesting,” said Jennifer Heerwig, a political sociologist at the State University of New York at Stony Brook.

“He said, ‘OK, I have this kind of asset, which is my fundraising prowess, and my donor list, and the ability to connect with people who maybe ordinarily wouldn’t donate. And so I’m going to use that and turn it into a formal organization that the GOP has to pay attention to.’ “

And the Republican Party is paying attention.

“We know that President Trump is still someone who was wildly popular, and someone who was and is an effective fundraiser,” said Paris Dennard, a spokesperson for the Republican National Committee. “We are optimistic that he will continue to be the type of former president that engages and wants to help the RNC fundraise.”

Dennard said Trump has agreed to attend an RNC donors event this spring in Florida, where Republican leaders will be encouraging donors and the former president to support their efforts heading into the midterm elections.