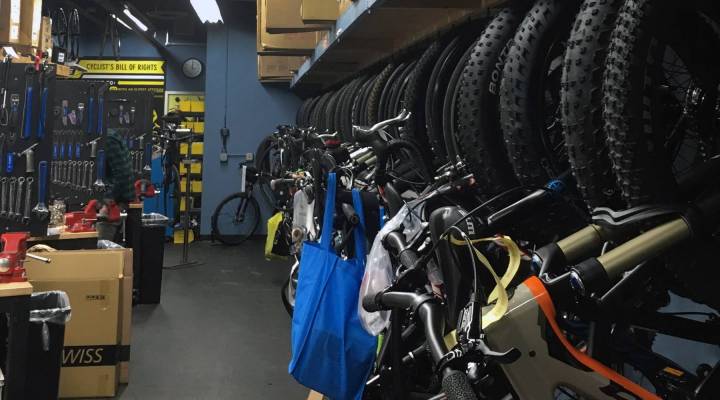 It’s about five degrees outside and snowing — it has been now for three days. But that doesn’t stop 51 year-old Martha Flynn. She zips up her boots, pulls on her gloves, and jumps on her bike.

Flynn loves riding in the winter. “You just feel like you’re in this cocoon of snow while you’re riding and it’s just magical,” she said.

Martha Flynn of St. Paul, Minnesota, is an all-season rider and loves riding her fat bike in the winter months.

She rides what’s known as a fat bike. It has a typical-looking frame, but sits on tires almost four inches wide.  It’s laughable at first — almost clown-like in its size. But these bikes have taken off in the northern Midwest over the last five or so years, driving winter revenue for bike shops that used to largely shut down in the colder months.

“We used to shutter about Oct. 1, whenever the cold weather would come and the leaves would dry up and fall off the trees,” said Kevin Ishaug, owner of Freewheel Bike, a midsize specialty retailer in the Twin Cities.  “But once we had the fat-bike evolution — or revolution — we didn’t see the same, you know, lay off half your staff and shutter the doors.”

He said every year now since 2009, he’s seen significant increases in revenue in the winter months, November through March. That’s not just sales of winter bikes, but also of the accessories that go along with them.

Walking through his shop, he pointed to a pair of boots on display that are rated to 25 degrees below zero. “There’s a whole range of stuff like that has evolved since this fat bike thing happened,” he said.

Pogies are another example. They look like enormous mittens, but they’re designed to attach around handlebars to keep hands warm while riding. It’s technical gear like this that adds extra revenue in the winter for the shop.

And then, of course, there’s maintenance.  Ishaug asked one of his mechanics how many fat bikes he works on compared to regular, skinny-tire bikes  in the winter. “Probably about three-to-one,” the mechanic answered.

Fat bikes have increased in popularity recently all over the country, not just for riding in cold temperatures.  They can be used like a standard mountain bike on all kinds of terrain. But the upper Midwest, along with Alaska and the Northeast, is still a top market for the trend.

A mechanic works on a fat bike at Gene Oberpriller’s Minneapolis shop, One on One Bicycle Studio.

“Even – people that aren’t traditionally what I’d call cyclists are excited about a fat bike because they view it as a winter activity — something I can get outside and do,” said Erik Saltvold, founder of Erik’s, one of the largest bike retailers in the country.

Gene Oberpriller­­­­, who runs a small shop in Minneapolis, agreed. “Yes,” he said,  “They see it and they’re like ‘that looks like fun.’ It’s their first bike.”

But Oberpriller and others acknowledge that price can be a fundamental sticking point for many would-be customers.  He said a good fat bike will start at about $1,200. And that’s not including cold-weather accessories. In comparison, he said, you could spend about $500 on your average new skinny-tire bike for just riding around town.