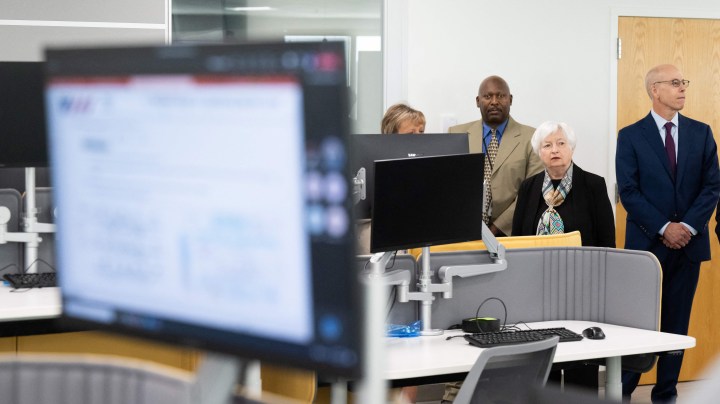 The Internal Revenue Service is trying to up its game. The agency is getting $80 billion in funding through the Inflation Reduction Act, which it will be using to upgrade technology, improve enforcement and hire more staff.

​On Thursday, Treasury Secretary Janet Yellen announced that the IRS will be hiring 5,000 new customer service representatives and fully staffing Tax Assistance Centers across the country by next year.

The new hires are just part of a range of initiatives Yellen said are aimed at improving the agency’s performance and customer service.​

​​The IRS’s budget has fallen in real terms over the past decade. Its workforce is aging and it’s had to implement new health care and child tax credits, said Elaine Maag at the Urban-Brookings Tax Policy Center.

“So you have an agency already operating on a shoestring asked to do more,” she said. “At this point, I’d say they’re pretty tattered.”

Last year, the agency only answered about 1 in 10 taxpayer calls, and the average wait time was 30 minutes.

But hiring entry-level customer service workers, auditors and tax lawyers will be a challenge, said Marc Goldwein at the Committee for a Responsible Federal Budget.

“It’s a very tight labor market, and their wages aren’t necessarily going to be competitive with the private sector.”

And Maag at the Tax Policy Center said that stigma and disinformation aren’t helping.

“The more people are speaking poorly about the IRS, threatening the IRS — that makes it difficult to hire,” she said.

If the IRS could fix its customer service operation, that might improve the agency’s reputation, said Alex Muresianu at the Tax Foundation.

“Having an agency very responsive to taxpayer concerns I think would ameliorate frustration with the IRS,” Muresianu said.

And, he said, that might increase voluntary tax compliance among middle-income Americans. That would allow the IRS to aim its big audit-and-collection guns at higher-income tax cheats — where the real money is.