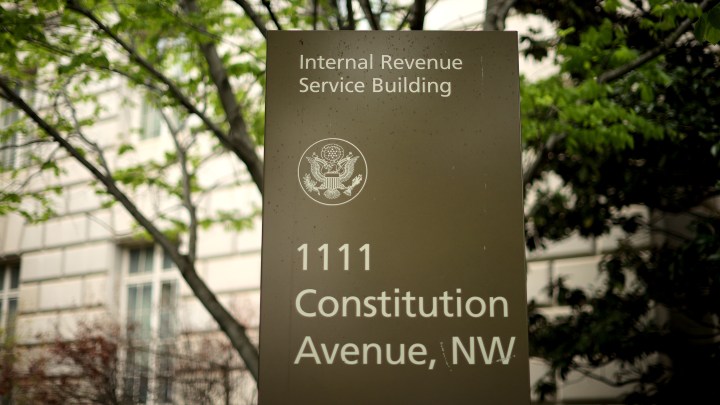 COPY
Following the news of decades-high inflation in the U.S. economy, the IRS released new rates for the standard deduction and tax brackets. Chip Somodevilla via Getty Images

Following the news of decades-high inflation in the U.S. economy, the IRS released new rates for the standard deduction and tax brackets. Chip Somodevilla via Getty Images
Listen Now

This big economic news of the week has been inflation. The consumer price index marked a 6.2% increase in the past year, the highest rate in more than a generation.

On the heels of that, the IRS announced updated tax brackets, a way of recalculating how much people’s yearly income is really going to be worth.

The IRS adjusts the tax brackets every year, but it’s the inflation that has us paying more attention now.

“When inflation increases, these thresholds are also increased,” said Greg Kling, an accounting professor at the University of Southern California.

Take a taxpayer who earned $87,000 in 2021, putting them at the lower end of one tax bracket. Assuming they didn’t get a raise, the IRS now puts them in a different bracket and they pay less tax.

The reason that’s how it is today has a lot to do with the rapid inflation of the 1970s. “That hit taxpayers pretty hard,” said Joe Thorndike, who directs the Tax History Project.

In the ’70s, the IRS did not adjust for inflation. So, potentially when you got a raise, “your income would creep up into the next bracket, right? And that is a problem. That’s a tax increase for you,” Thorndike said.

President Ronald Reagan, who took office in 1981, thought that was a problem, too.

“Government makes a profit on inflation,” Reagan once said. “We intend to stop that.” And he did.

There’s a lot to say about Reagan-era tax legislation, but — in short — that’s how we got the inflation-adjusted system of today.

Kara Perez owns the financial education company Bravely Go. There are a couple of things she tells clients about this adjustment: “The first thing it’s going to mean for you is that you might pay less in taxes. So thumbs up to that.”

The second thing is that the IRS increased the standard deduction — another thumbs up for taxpayers.

Also, the IRS calculation is based on the prices of a wide range of goods. Some people will feel the costs more than others, according to Dean Baker with the Center for Economic and Policy Research.

“All the vegetarians could be very happy because they’re not paying higher prices for meat,” he said.

But with the tax changes, he said, they’ll be compensated as though they were.