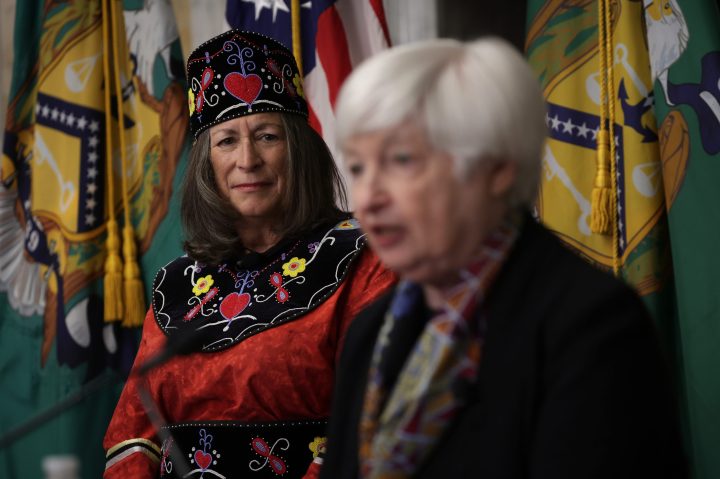 COPY
Secretary of the Treasury Janet Yellen speaks as U.S. Treasurer and Mohegan Tribe Chief Lynn Malerba listens during a ceremonial swearing-in for Malerba at the Cash Room of the Treasury Department September 12, 2022 in Washington, DC. Alex Wong/Getty Images

Secretary of the Treasury Janet Yellen speaks as U.S. Treasurer and Mohegan Tribe Chief Lynn Malerba listens during a ceremonial swearing-in for Malerba at the Cash Room of the Treasury Department September 12, 2022 in Washington, DC. Alex Wong/Getty Images
Listen Now

Soon, U.S. currency will bear the signature of not one but two women. Those of Treasury Secretary Janet Yellen and our new U.S. Treasurer Lynn Malerba.

Malerba is also Chief of the Mohegan Tribe based in Connecticut. Her swearing-in this week is particularly meaningful in Indian Country.

Malerba is the latest in a string of Native people tapped for high level government roles outside the Indian Affairs bureaus.

“And that can only enhance better understanding and better delivery of programs and services” to tribal governments and communities, said Patrice Kunesh, formerly with the Minneapolis Fed’s Center for Indian Country Development.

As Treasurer, Malerba will oversee Treasury’s new office of Native and Tribal Affairs in addition to running the U.S. Mint and Fort Knox and being a liaison to the Federal Reserve.

Wayne Ducheneaux with the Native Governance Center said Malerba is tasked with repairing the department’s sometimes troubled relationship with tribes.

“So to have somebody at the highest levels of that agency who understands in their DNA the importance of tribal trust responsibility … I mean it’s monumental.”

During her swearing-in, Malerba said she’ll promote economic development in tribal and other underserved communities.