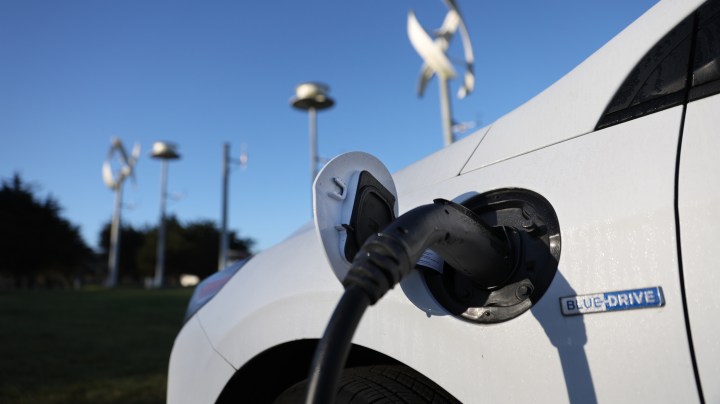 COPY
The batteries that power EVs — while cheaper than they used to be — remain stubbornly expensive compared to internal combustion engines. Justin Sullivan/Getty Images

The batteries that power EVs — while cheaper than they used to be — remain stubbornly expensive compared to internal combustion engines. Justin Sullivan/Getty Images
Listen Now

General Motors announced this week that it plans to release an electric version of its Chevy Equinox SUV. Features will include a range of about 250 miles on a single charge and fast-charge technology. Prices will start at around $30,000.

For many consumers, EVs are still priced out of reach — even with all the incentives available.

Pretty much every major car company wants a piece of the electric vehicle pie. But the batteries that power EVs — while a lot cheaper than they used to be — remain stubbornly expensive compared to internal combustion engines, said Gartner analyst Mike Ramsey.

“If you tried to replace an engine on a vehicle versus trying to replace a battery on a vehicle, the price difference would be dramatic,” he said. “Two to three times the cost.”

That’s because carmakers have prioritized increasing how far electric vehicles can travel on a charge, Ramsey said. “So even though the energy density is getting better, we’re using the improvements we’ve gotten to get longer range instead of lowering the cost.”

This year’s spike in gas prices has helped supercharge demand for EVs, even as supply chain problems have affected production.

Since EVs still account for a relatively small slice of the market, Jessica Caldwell at Edmunds said companies could focus on more affluent consumers. But they’re not.

“I think a goal for automakers would be to target a lower-price vehicle and able to bring newer buyers and more buyers.”

And the tax incentive for purchasing EVs in the new Inflation Reduction Act may help with that, according to professor Jessika Trancik at the Massachusetts Institute of Technology. Trancik, who has studied price differentials for EVs, said the incentives will help because they set an income cap for people to qualify, among other things.

“I think it’s really important to structure them in such a way that the benefits are equitably distributed across the population,” she said.

Because while EVs cost more upfront, Trancik said they can be cheaper than traditional vehicles when you add in fuel and maintenance costs over time.