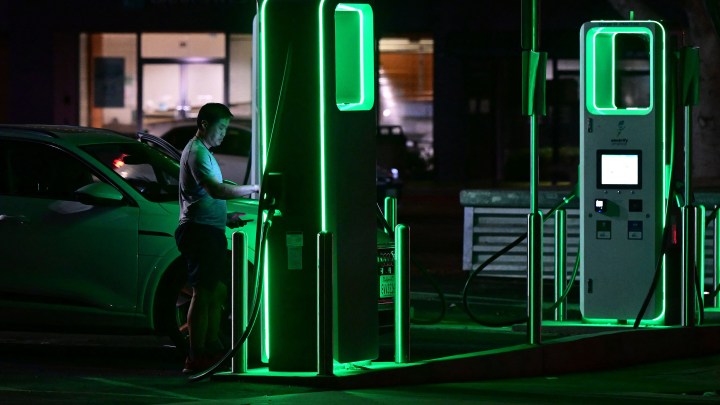 COPY
If all cars in California were electric, the state would need to produce around 50% more electricity, according to one estimate. Above, a driver charges his vehicle in Monterey Park. Frederic J. Brown/AFP via Getty Images
A Warmer World

If all cars in California were electric, the state would need to produce around 50% more electricity, according to one estimate. Above, a driver charges his vehicle in Monterey Park. Frederic J. Brown/AFP via Getty Images
Listen Now

Californians have been urged not to charge their electric cars during peak hours as the Golden State sweats through the second week of record-breaking temperatures. Coming on the heels of the state government banning the sale of gasoline cars by 2035, the irony is pretty hard to miss.

On one hand, the searing reality of the climate crisis could not be more clear, but on the other, the power grid’s readiness for a fully electric future remains an open question.

Americans drive about 3 trillion miles a year. Right now, about 1% of cars on the road are electric. Move all those miles from gas to battery, and “it’s going to require us to generate more electricity,” said Joshua Rhodes at the University of Texas at Austin.

But how much more is complicated, he said. Sure, populous states with lots of cars will need a lot — but that’s just part of the equation.

Take his state of Texas, where air conditioning is vital during the hot months. “Texas already uses a lot of electricity. We already have a lot of power plants, and we do have some slack in the system.”

That power needs to get to cars, said Michael Hagerty with the Brattle Group, via “transmission lines, distribution systems and chargers.”

His firm estimates that the full electricity supply chain will need about $100 billion of investment to meet demand by 2030. But unlike, say, air conditioners, cars have giant batteries, and they don’t usually need to be charged during peak hours, said Ethan Elkind at the University of California, Berkeley.

“A big thing is to really adjust our electricity rates so that we make it very cheap for people to charge their vehicles at off-peak hours,” he said.

That would take some of the strain off the grid when more EVs hit the road.