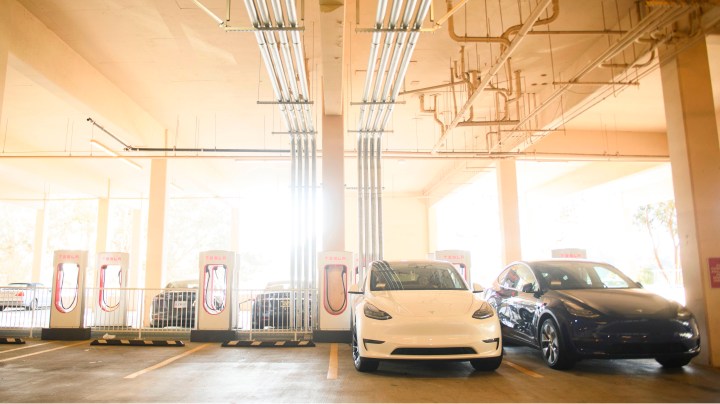 COPY
Tesla EVs charging. The range of electric vehicle models is expanding, and the government is trying to spur the growth of the market. Patrick T. Fallon/AFP via Getty Images

Tesla EVs charging. The range of electric vehicle models is expanding, and the government is trying to spur the growth of the market. Patrick T. Fallon/AFP via Getty Images
Listen Now

We’ve told you about the auto industry’s struggles of late — microchip shortages, supply chain issues — but in spite of all that, electric car sales keep growing.

Tesla still dominates the market, but Ford told us this week it was opening EV factories in Kentucky and Tennessee. Then there are the buyer incentives and the infrastructure funding in the budget reconciliation bill in Congress.

Let’s not lose context here: Electric vehicles sales, excluding hybrids, still make up only a little more than 2% of sales. But their growth is strong.

There are a number of reasons for that, like climate policy and the industry’s investment, but ultimately the automakers are meeting the demands of the market, said Chris Harto at Consumer Reports.

“Up until about a year ago, if you wanted an EV that costs less than $50,000, all of your options were compact cars,” Harto said. That class size, he said, isn’t very popular, even for cars with combustion engines.

Over time, Tesla had competition, as Volkswagen and General Motors introduced less-expensive SUVs. And Ford said it has 120,000 pre-orders for its EV F-150 truck, which is scheduled to launch next spring.

Automakers investing in EV variety is certainly important, but we shouldn’t discount how much government policy plays into the evolution of transportation, said Paul Bledsoe, a consultant to the Energy Department under President Barack Obama. He now works for the Progressive Policy Institute think tank.

“The tax incentives are crucial to get people into the EV driver’s seat,” Bledsoe said.

The budget reconciliation bill in Congress would add even more tax incentives, bringing the total possible credit as high as $12,500.

But for all that practicality, this shift in the auto industry boils down to what people want, per Stephanie Brinley at the consultancy IHS Markit.

“Cars do tend to still be an emotional purchase. There’s a ton of choice out there, and so we definitely do a lot of rationalization for what we really want,” she said.

What some people want right now, she said, is to feel good about the environmental consequences of what they’re driving.