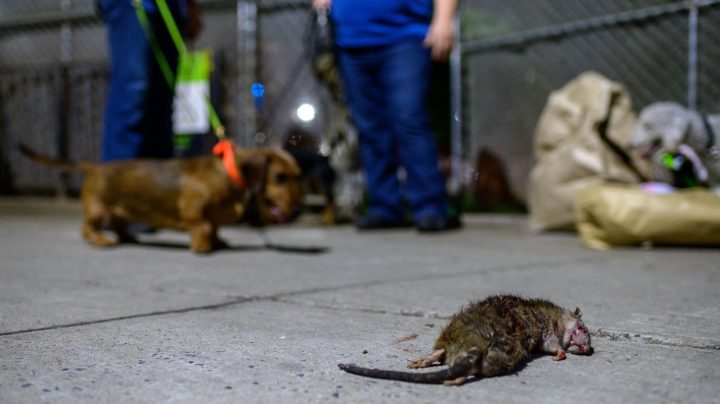 COPY
A dead rat lies on the ground, hunted down by dogs of Ryders Alley Trencher-fed Society in lower Manhattan last year. Rat sightings have increased in New York City since the start of the pandemic. Angela Weiss/AFP via Getty Images

A dead rat lies on the ground, hunted down by dogs of Ryders Alley Trencher-fed Society in lower Manhattan last year. Rat sightings have increased in New York City since the start of the pandemic. Angela Weiss/AFP via Getty Images
Listen Now

The smoke billowing from his car was foul. “A very specific smell,” Joe Paternoster recalled as we walked toward his black SUV, parked on 11th Avenue in New York City, near a delivery company warehouse.

Early in the pandemic he wasn’t driving as often, and his car would sit on the street for stretches of time. When he started it up one day, it started smoking.

“But it wasn’t overheating. I drove into a local garage, the guy pops the hood and he’s like, ‘You have rats.’”

The rats had made a nest under the hood, dragging with them orange peels and McDonald’s wrappers. “There was … three to five pounds of rat feces sitting on top of the engine, and it was literally frying.”

Six months later, the rats visited again, and Paternoster had to pay $2,500 to repair the wires they chewed through. Only a week before we spoke, rats ate through one of his windshield wiper fluid tubes.

We arrived at his car and he popped the hood. “There, see that?” He pointed to the top of the engine, where divots in the engine cover cradled handfuls of rat poop.

“I have definitely seen more rats since the pandemic,” Paternoster said.

It’s up in the air whether there are actually more rats or whether people are just seeing them more often.

“You see more rats because they’ve moved,” said Richard Reynolds, a member of R.A.T.S. — Ryders Alley Trencher-fed Society — a group of dog owners that lends its rat vigilante services to hunt down rats when asked to do so by desperate New Yorkers (it gets about three requests per week.) “Perhaps you have rats where you didn’t have them before, but they’re the same rats. They just came from next door.”

In 1893, when the city started moving from horse-drawn cars to electric trolleys, rats no longer had horse grain to feed on and stables to live in, The New York Times reported at the time. The rodents started roaming in search of new homes and food sources, and caused a boom in rodenticide sales.

In 2020, as subway ridership fell to 8% of 2019 levels and restaurants closed, rats once again would have had to look elsewhere for food, just as many people were spending more time at home, noticing them. In many cases, the rats were hangry.

Regardless of whether the rats have multiplied or moved or both, they have burrowed their way into the heart of an economic and political fight worth many tens of millions of dollars.

“Outdoor dining,” said Shannon Phipps, a resident of the Williamsburg neighborhood in Brooklyn. “We are living in an infestation right now, and this is in tandem with the outdoor dining.”

Phipps is one of countless New Yorkers who are certain that there are indeed more rats and blames the alleged increase on all the outdoor dining structures that have proliferated on New York streets since early in the pandemic.

Earlier in the pandemic when indoor dining wasn’t allowed, thousands of restaurants created outdoor covered dining areas on the street to stay in business. That emergency program was then made permanent by former Mayor Bill de Blasio.

Phipps points to chewed holes in the side of an outdoor dining structure in her neighborhood, leading to spaces between the street and the floor. “This is really good for them to come in and out, and it becomes another habitat for them and another food source.”

The dining structures vary widely in quality and condition. Some are pristine with carpeted floors and plexiglass windows and doors; others have slats for flooring, with gaps where food scraps can collect. Some are practically abandoned. Many have rat bait stations.

“We think there has to be a pervasive dismantling of the emergency sheds,” said Michael Sussman, a lawyer who’s filed two lawsuits against the city over the outdoor dining program.

Up on the Upper West Side, restaurant owner Manny Colon is showing off his outdoor section at Manny’s Bistro. It is built on the street and is immaculate — painted a crisp maroon and shiny black, with carpeted floors and white tablecloths.

“With a weatherproof roof, which is a three-layer roof. And all the greenery planted all around. So I followed all the guidelines, went above and beyond,” Colon said.

“There are some structures that were not built sound. Maybe some people just couldn’t afford to build them following the guidelines, some people just didn’t care, and the ones that aren’t taken care of that are hazardous, get rid of them. We need more enforcement.”

He points down the street to another battleground in the rat wars. A pile of trash bags sitting on the sidewalk. “This is city garbage coming from a residential building, not coming from a restaurant.”

Trash bags in New York are left out on the street in massive piles on trash day. New York cut its sanitation department’s budget early in the pandemic, resulting in fewer workers and less frequent trash pickup, and more food for rats.

The subway system spends another million on rat control, according to the MTA, with its own rat control team as well as contracts with outside exterminators. And the overall sanitation budget is now bigger, with more frequent trash pickup from city trash cans. Alternate side parking is back as well, which requires cars to switch the side of the street they’re parked on to allow access for street sweepers to reach accumulated trash in the curb. The city kicked off a $1.3 million pilot program to test containerizing trash so it doesn’t languish on sidewalks.

“So we should be on track to be able to provide a baseline of rat mitigation services that we weren’t doing in the last two years,” Nurse said.

For now though, rats are as visible as they ever have been. As I walk down 50th Street in New York’s Hell’s Kitchen neighborhood, no less than five rats dart across the sidewalk, narrowly missing my feet.

It’s situation that Joel Grassi has to deal with all the time. He’s with BHB Pest Elimination. “In addition to doing pest control, I’m also an ordained minister. I have a doctorate in theology, so I pray for God’s creatures on Sunday and kill them on Monday, and this has created a dilemma for myself.”