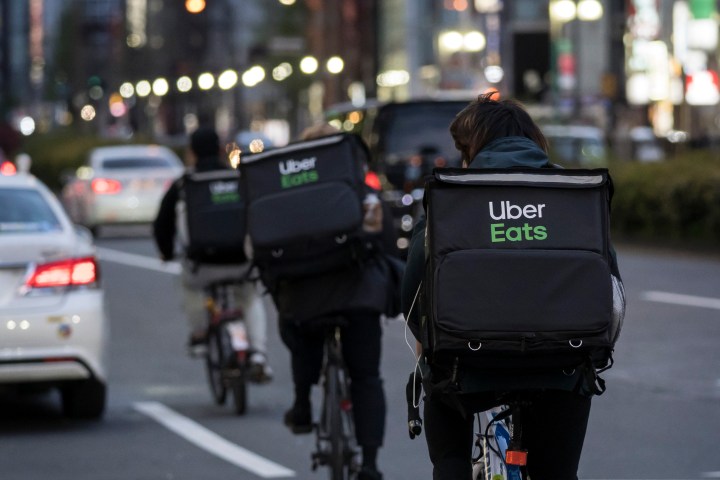 COPY
Gig workers in the U.S. are subject to a patchwork of regulations that differ from state to state and city to city, says Terri Gerstein. Tomohiro Ohsumi/Getty Images
Economic Pulse

Gig workers in the U.S. are subject to a patchwork of regulations that differ from state to state and city to city, says Terri Gerstein. Tomohiro Ohsumi/Getty Images
Listen Now

So-called gig workers are everywhere in the economy — Uber drivers, food delivery people, and others.

In today’s workforce, they’re basically considered an independent contractor under the law. There aren’t many rules that govern gig work — on the federal level there’s virtually nothing, and in most states, there isn’t much either.

In California, Uber spent hundreds of millions of dollars in 2020 to get Proposition 22 passed, a ballot measure that promised more pay and benefits for gig workers in exchange for remaining contractors. A similar measure was slated to be on the ballot in Massachusetts before the state supreme court ruled against it in June.

As part of our Economic Pulse series, “Marketplace Morning Report” host David Brancaccio spoke with Terri Gerstein, director of the State and Local Enforcement Project at the Harvard Law School Labor and Worklife Program, about the state of gig work regulation in the U.S. and where it goes from here.

David Brancaccio: California went into [this] space with that famous Assembly Bill 5, still in dispute. I think a measure to deal with gig economy workers ran into trouble in Massachusetts. Where are we? It’s a lot of states wrestling with this, right?

Terri Gerstein: Yes, there are a lot of states wrestling with this. There was Proposition 22, in California, which really focused specifically on gig workers. But I think it’s valuable to realize at the outset of the conversation that what states are grappling with, from California to Massachusetts, everywhere, it’s not just in relation to gig workers, it’s also in relation to this broader issue of who’s an employee, and entitled to all of the protections that our social contract and our laws have said that employers have to follow, and who’s an independent contractor and really running their own business. A number of states have carved gig companies or platform companies out of protection, just by statute, because these companies, as you know, have a lot of money and have, you know, really sophisticated lobbying operations. And so some of the more conservative states have just carved them out and said, these workers are not employees entitled to certain rights. But in a number of other states this is something that’s being really carefully looked at as they try to figure out that this is often described as are seen as a new form of organizing work. Although the work itself is really the same. The only difference is do you procure it through an app versus more traditional measures.

Brancaccio: I mean, it is a conundrum for experts like yourself and for the legal system. I mean, it’s if you’re driving for Uber or DoorDash, do you really own your own business? You know, you could argue it in different ways?

Gerstein: Well, I think for most people, when you really crystallize it to that question, “Is your Uber driver running a completely independent business,” I think, you know, it’s just common sense. It’s pretty clear that they’re not running their own business. These workers are economically dependent on the company, there are all kinds of methods of control that the company exerts, the drivers don’t set their own prices. And it’s pretty clear that these people are actually employees. And there have been court cases that have found that, for example, in New York state, there was a case about a Postmates worker, and whether that worker was entitled to unemployment insurance. And the state’s highest court upheld the decision by the Labor Department finding yes, this worker was, you know, subject to control and was not running their own business and had the right to get unemployment insurance, just like every other worker for a mom and pop store or the, you know, the diner down the street.

Brancaccio: But it’s still not exactly the same as employee. I mean, one of the things about employee, right, is, you don’t get to set your own hours you do if you’re driving for Uber, for instance, and maybe not using their tools or using yours, the car?

Gerstein: Well, it’s interesting, this issue of flexibility, it’s a little bit of a dodge by these companies because there really is nothing in the law that says that you can’t have flexible work hours and be an employee. And in fact, we’ve seen, you know, there are some jobs that have routinely had flexible hours. But during the pandemic, we’ve seen so many remote workers who are working really very flexible hours, but they’re still employees. Even if you’re looking at sort of less professional-level workers or office workers, there are instances where workers are able to bid on shifts, you know, and can be part-time. So this notion that flexibility is incompatible with employee status is something that the gig companies have really pushed. But it’s not actually supported by the law. And it’s not actually really supported by reality.

Brancaccio: If you’re trying to answer, “What are the rules?” for me as a business person, or for me, as an employee/ contractor, you gotta check state by state, though, right? That’s just how it is.

Gerstein: So it really depends on what law you’re looking at, and which right you’re looking at whether you need to look to state law or federal law. And then what’s interesting as well in this space, is that within the past several years, some cities have gotten involved in trying to make sure that these workers have better working conditions. Seattle and New York City are the main leaders in this area. And what’s happened with Seattle and New York is that they’ve sort of said, “Okay, we’re gonna sidestep this issue of classification, and whether they’re employee or independent contractor, we just believe that anyone who works within our city should at least be making X amount of money. Whatever you’re classified as there should be a floor if you’re working for one of these platform companies.” And so New York was first to do this. The Taxi and Limousine Commission passed a pay standard for Uber and Lyft drivers. And then Seattle passed a number of laws including a pay standard for drivers. New York City is now in the process of figuring out what the pay standard should be for delivery workers like DoorDash. You know, while states and the federal government sort of grapple with this issue, cities and municipalities, localities have a really potentially important role to play in just increasing standards and setting floors right away, while sidestepping that issue of classification.

Brancaccio: So different sort of question, I don’t know if you’ve seen any of the data. Is gig work seeming less attractive with this labor shortage that we’ve run into as the economy surged after pandemic?

Gerstein: I have not seen the data on that, I think that the inflation makes this work much less appealing, because part of the way the gig work operates for drivers and delivery workers, is that many of the significant costs of operation and the risk is offloaded from the company, which is larger and better able to bear the risk, to the workers. So because the gig workers themselves are dealing with these costs, which traditionally, for employees, employers cover those costs. I think that that’s something that’s made it much less lucrative for people.

Brancaccio: Let me ask you about the possibility of unionization by platform or gig economy workers. I think I remember the Biden administration earlier this year, leaning into the notion that gig economy workers should be allowed to form unions.

Gerstein: So earlier this year would happen is that the General Counsel of the National Labor Relations Board, which is the agency in charge of unionization and administering the law that allows workers to organize, the general counsel issued a memo basically saying that she was going to revisit a decision that had been issued during the Trump administration. And that decision wasn’t about a platform economy or Uber or Lyft. It was about SuperShuttle, it was the same kind of thing where if you know, is each super shuttle driver actually running their own independent business. This Trump administration NLRB decision had, in that decision, really set forth some guidance that was really unfavorable for workers to be able to have the right to unionize. That decision is being revisited. You know, that obviously has implications for platform workers and gig workers and, you know, a whole range of other workers if you make it more expansive, who the law actually applies to.

Brancaccio: So it’s not impossible for gig workers to unionize?