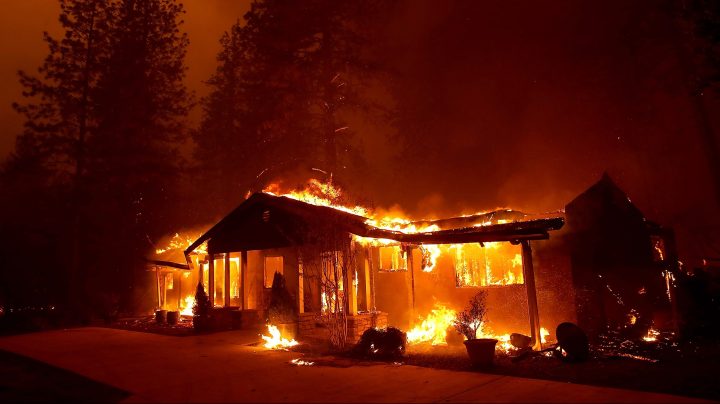 COPY
The Camp Fire destroys a home in Northern California in 2018. Author Katherine Blunt discusses the disaster's consequences for the region's residents and for the Pacific Gas and Electric utility in her book "California Burning." Justin Sullivan/Getty Images

The Camp Fire destroys a home in Northern California in 2018. Author Katherine Blunt discusses the disaster's consequences for the region's residents and for the Pacific Gas and Electric utility in her book "California Burning." Justin Sullivan/Getty Images
Listen Now

Utilities like gas and electricity are necessities, yet more than 20 million Americans are struggling to pay those bills.

Meanwhile, the companies that generate and distribute that energy have their own challenges to face: decades-old infrastructure, pressure to “green” the system and their investors’ bottom lines.

In a new book, “California Burning: The Fall of Pacific Gas and Electric — and What It Means for America’s Power Grid,” Katherine Blunt tells the story of how budget cuts and past negligence of maintaining the system have brought us infrastructure that’s falling apart, leading to expensive and deadly accidents.

Blunt joined Marketplace’s Kai Ryssdal to talk about utilities’ role as profit-generating companies but also as public goods and why electric grids are being mismanaged across the country.

Kai Ryssdal: Can we jump to the subtitle of this book? It’s called “The Fall of Pacific Gas and Electric — and What It Means for America’s Power Grid.” Can you talk for a second about the rise of Pacific Gas and Electric, just the infrastructure that it inherited over the past century? Because that seems to me to be germane to some of the most high-profile incidents in this book.

Katherine Blunt: Absolutely. So PG&E merged with another company back in 1930 that had built a lot of transmission infrastructure all throughout the Sierra Nevada foothills in Northern California. And a piece of one of those century-old towers failed in November of 2018, and ultimately dropped a live wire that sparked the deadliest and most destructive wildfire in California history. And when you think about America’s power grid as a whole, there’s a lot of it that is considerably old, decades old, if not century-old components. And as a result, there are elements of our grid that are becoming more prone to failure, especially as climate change creates new stresses on the grid.

Ryssdal: Well, yeah, so let me jump to what I had thought was going to be the last question, but we’ll put it up here at the top. And I’ll continue with the subtitle theme. What does it mean for America’s power grid? Because we need electrical power all the time. But we also need to be not investing in coal burning, natural gas fired, you know, all those expensive fossil fuels. We need to go green. We need to change our infrastructure. But we’re dealing with stuff that’s decades and centuries old.

Blunt: That’s right. Utilities all across the country face a big challenge at the moment in greening the system, transitioning to cleaner forms of energy, as you say, as well as upgrading the grid to replace some of this decades-old infrastructure. And electricity is something we need all the time. And we’re gonna need more of it going forward.

Ryssdal: OK, so let’s get to PG&E specifically. And some of the incidents laid out in this book. There are some deadly wildfires caused by PG&E equipment failures, there is a natural gas explosion from a failed pipeline up in San Bruno, California, in the San Francisco Bay Area. And you describe a scene where executives at PG&E are going over a PowerPoint in the aftermath of that explosion. And they’re talking about things that were “up for debate.” Literally, that’s the phrase: “This is up for debate.” And these things are not up for debate. Set that scene for us and tell us what was and was not up for debate for Pacific Gas and Electric.

Blunt: Sure. So this PowerPoint occurred shortly before the natural gas pipeline explosion, but there was an off-site meeting in which executives put up a PowerPoint, and they had one PowerPoint slide on what was not up for debate was 8% annual growth in earnings per share. What was up for debate was safety and reliability.

Ryssdal: I’m sorry, say that again. Because it sure sounded like you said that the company decided that profits were not up for debate, but safety was.

Blunt: That is what is implied on this slide. And this PowerPoint slide came to light as evidence in a trial that ultimately proved PG&E’s criminal culpability in this explosion. And a lot of the other evidence that came forward did a lot to show that PG&E was putting profits over safety for a number of years.

Ryssdal: Why is it so hard for us to, to draw the line, clear boundaries, between a utility, when everybody needs electricity, and a business? If that question makes sense. You know what I mean?

Blunt: Sure, sure. No, the majority of our power is provided by what we call investor-owned utilities. And they’re kind of strange, hybrid businesses, so to speak. They are publicly traded corporations, they are beholden to shareholders, but they are also regulated entities that provide a critical service. And it’s tough. I mean, the nature of the business historically has created tensions between those private interests — shareholders — and the public good.

Ryssdal: So let me say that this, it’s a, it’s a good and fast and engrossing read, and I don’t want to get down too far into the weeds of the legal trials and tribulations of PG&E because it’s only a half-hour radio program that we’ve got. So I would encourage people to read the book is why I said that, but do you think that anything has or will change systemically because of what has happened with PG&E?

Blunt: Yeah, so there’s no question in my mind whatsoever that the new leadership team understand the risks throughout the system in a way that they never have before, and they understand the consequences of mismanaging that risk. The new CEO, for example, came in and introduced a new strategy in which she’s going to try to bury 10,000 miles of power lines so that they can’t ignite fires. And theoretically, that is a great idea. But it comes with a lot of challenges. There are financial challenges, labor challenges, engineering challenges. I think certainly the desire is there. It’s just there’s a practical reality to contend with as well.

Ryssdal: And we have to say it ain’t just California, right?

Blunt: That’s right. No, it’s not. The topic of how do you transform any given utility system to account for new risk is becoming a very relevant topic throughout the entire country.