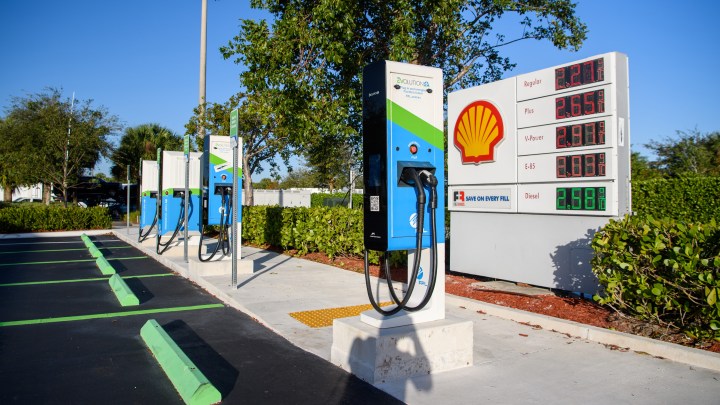 Randy Peddicord of Florida purchased his all-electric Volkswagen ID.4 for his 100-mile commute from Jensen Beach to Sebring. He charges at home and avoids using public chargers, which can cost as much as a tank of gas.

“When you look at your gas cars, you can stay in that car five hours, six hours before you have to fill it up depending on what you’re driving. That’s why I’d never take it on a long trip,” Peddicord said.

The Department of Energy reports sales of electric vehicles grew nationwide by 85% from 2020 to 2021. The Biden administration is pushing for more EVs and wants to build out a national charging network. Florida is working on expanding EV infrastructure.

Besides the high price of the vehicles, charging access and driver anxiety about taking long trips are the main reasons why consumers aren’t willing to make the switch to all-electric cars.

The state of Florida is trying to address this.

“We’re installing more than 1,000 charge ports at over 200 locations across Florida, and there’s going to be a lot more to come,” said Anuj Chokshi of Florida Power & Light.

The majority of the ports are Level 2 — slow chargers. They’re used to “top off” batteries and can be found in over a dozen South Florida cities, free of charge.

Chokshi said FPL will have 34 fast-charge sites up and running by the end of the summer, spaced approximately 25 miles apart along Florida’s highly trafficked highways. But drivers will have to pay for a fast charge.

The Edison Electric Institute is working with power companies in places like Florida to provide fast charging stations along major U.S. travel corridors by the end of 2023.

“These [direct current] fast charging stations really are designed to deliver what you need to get back going on the road in a short amount of time, say 15 to 45 minutes, somewhere you can stop for lunch and then keep going on your journey,” said Kellen Schefter, senior director of electric transportation for EEI.

“There were a couple spots that were difficult,” Bonardi said. “In rural Utah, there weren’t too many, but overall I didn’t have any major issues. I didn’t need to get anywhere immediately.”

The Biden administration announced plans to build out a national network of 500,000 chargers by 2030 as part of the new infrastructure spending plan. And states, including Florida, could receive federal funding.