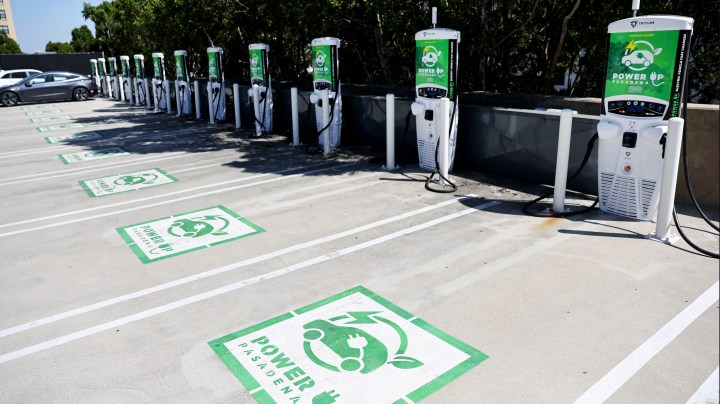 The Joe Biden administration has a goal tied to decarbonizing transportation: By 2030, half of the new cars sold would be either electric or electric hybrid. To get there, it’s pushing to get 500,000 new EV chargers up and running across the country. The infrastructure package that became law in November included $7.5 billion in federal funding to subsidize building that charging network.​

On Thursday, the administration proposed rules that would, among other things, mean that any charging station built with federal money must accommodate any electric car. Which — as any EV owner can tell you — is not the case today.

Imagine you’re out driving and you need gasoline, so you pull into a gas station only to find the pumps don’t fit your car. Or maybe a couple do, but they have long lines. That’s kinda the deal now with electric vehicles because there’s no standard charger.

“That’s a situation we would like to move away from,” said Jessika Trancik at the Massachusetts Institute of Technology.

The new rules would mean all new charging stations built with federal funding would have to be universal, she said.

“It is really important to know that when you’re driving up to a charger that you’re going to be able to use it, obviously, and also that chargers are going to be available at regular intervals along your trip.”

Having a lot more chargers that any EV can use will be key to getting more people to go electric, per Michelle Krebs at Cox Automotive.

“There’s three things that stand in the way of massive EV adoption: price, range and the charging infrastructure,” she said.

That infrastructure has improved a lot. But there are still real barriers, especially for anyone who doesn’t have a driveway, said Jeremy Michalek at Carnegie Mellon University. That was him when he first got an electric car.

“I could not count on being able to charge it every day,” he said. “It depended if I got the spot in front of my house or not. And I had to run an extension cord up the stairs to plug it in.”

Kind of a hard sell. “If you don’t have off-street parking, you need to know that you are going to have access to public chargers and be able to reliably charge your vehicle,” Michalek said — both near your home and along the highway.