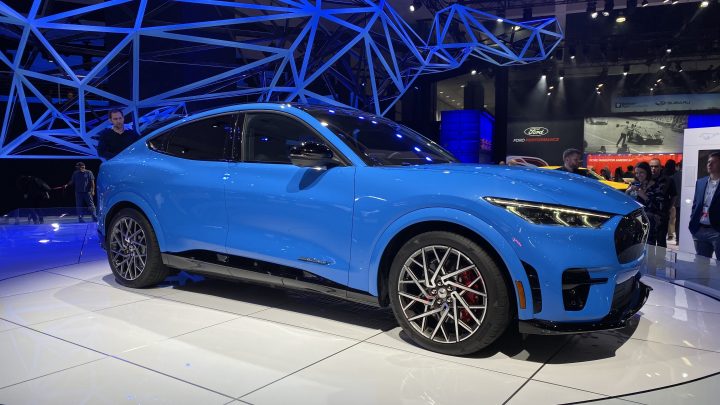 Electric cars make up between 1% and 1.5% of total passenger vehicle sales in the United States, according to Karl Brauer, executive publisher of Kelley Blue Book. One of the major obstacles for those considering an electric car: some people worry there just aren’t enough places to plug in.

Mallory Bass lives in Los Angeles and drives a Mini Cooper that runs on gas. When her lease is up in early 2021, she’ll consider an electric car.

“I like that it’s good for the environment, that I would spend less money on gas,” she said.

What she doesn’t like is that it could be difficult to find a place to charge.

“When you buy a gas-powered car, you don’t ask: how many miles can I go on a tank of gas,” said Chevrolet spokesman Shad Balch. “But in an EV, that’s your first question. ‘How far can I go before I run out, and what happens when I do?’”

Right now, there are around 76,000 public charging stations in the country, according to the Alternative Fuels Data Center, compared with 168,000 stations that serve gas.

“We’re improving on EV infrastructure, but we’re not where we need to be yet,” said Kevin Roberts, a senior mobility analyst with consultancy firm EY.

It surveyed U.S. consumers and found more than half won’t buy an EV due to a lack of charging stations. “Range anxiety is a major concern for most consumers,” Roberts said.

Public chargers are operated by a handful of companies, including Greenlots, EVgo and a new player, Electrify America. Volkswagen created the subsidiary as part of its U.S. Department of Justice emissions settlement that requires the company to spend $2 billion on charging infrastructure.

Brendan Jones, the chief operating officer at Electrify America, said by the end of 2021, it plans to have installed 3,500 high-speed chargers nationwide. These chargers can refuel an electric car with 20 miles of range per minute.

Mallory Bass said she’ll be on the lookout for more charging stations over the next year.

“Maybe I’ll do the research and go for an electric car,” she said. “Maybe there will be more charging stations.”

Seeing more chargers might tip the balance on what she decides to drive.