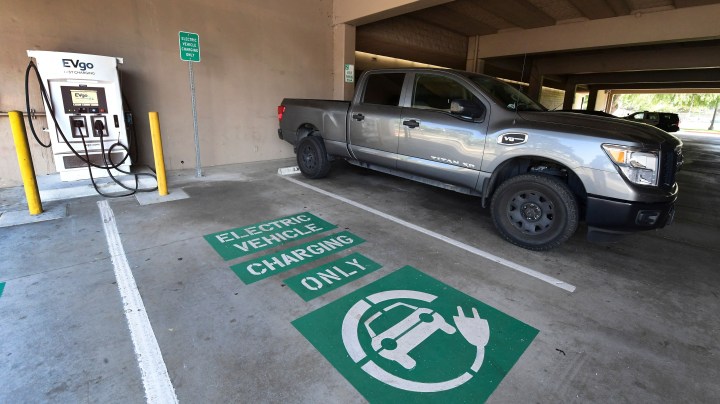 COPY
An electric vehicle charging station in Southern California. The Biden administration hopes the nation will have half a million of these facilities by 2030. Frederic J. Brown/AFP via Getty Images

An electric vehicle charging station in Southern California. The Biden administration hopes the nation will have half a million of these facilities by 2030. Frederic J. Brown/AFP via Getty Images
Listen Now

President Joe Biden visited one of General Motors’ electric vehicle plants in Detroit on Wednesday to sell the $1.2 trillion infrastructure bill he just signed into law.

That package includes $7.5 billion for adding electric vehicle charging infrastructure around the country. Still, a lot will need to be done to reach Biden’s goal for charging stations.

When Andrew Moseman decided to drive his Tesla from Los Angeles to a bunch of national parks in Utah a couple of years ago, he wasn’t worried about making the trip on the highway.

But he was worried about finding charging stations in more remote areas between the parks.

“I decided to try to go from hotel to hotel and only stay at places that had Tesla chargers,” he said. “That worked until it didn’t work.”

When he got to his second hotel, the two EV chargers were already being used. He was able to find just enough power to get to the next day. But it was a little dicey.

There are still a lot of places around the country where EV chargers are hard to find. But a growing number of companies — from carmakers to startups — are building more of them all the time.

“We have stations in 46 states and we feature ultrafast charging, which is capable of recharging a car at 20 miles of range per minute,” said Matthew Nelson with Electrify America.

Any electric car can use its stations, Nelson said. That includes Teslas, which have their own, unique kind of plug, along with the vast majority of EVs in the U.S., which have combined charging system plugs.

For instance, big chains like Target or Walmart will often lease space in parking lots. “And then we can’t build a station unless it can be connected to the power grid. And so we reach out to the utilities, and the utilities design the service, and then we build the station,” Nelson said.

Nationwide, there are just under 50,000 public EV charging stations. Biden’s goal for 2030? Half a million.