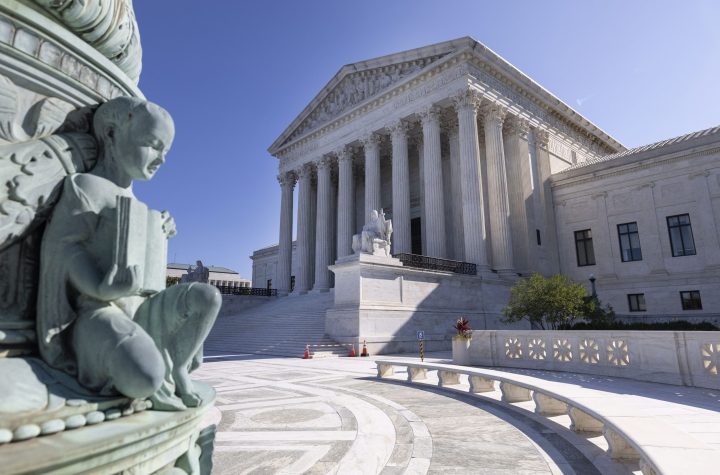 COPY
With the Supreme Court's overturning of Roe v. Wade, eyes have turned to how anti-abortion groups could change. Kevin Dietsch/Getty Images

With the Supreme Court's overturning of Roe v. Wade, eyes have turned to how anti-abortion groups could change. Kevin Dietsch/Getty Images
Listen Now

In the wake of the Supreme Court overturning Roe v. Wade last week, abortion access has been eliminated or limited across the country.

Some have wondered whether anti-abortion groups will change course as a result. Crisis pregnancy centers – controversial nonprofits established to dissuade pregnant people from having abortions – have been a key part of many anti-abortion groups’ strategy.

Almost eight years ago, Maleeha Aziz found out she was pregnant. She went to a crisis pregnancy center in Dallas to get a free ultrasound.

But before she could get it, they asked her to watch a 30-minute video of a crude simulation of what the center falsely represented as a doctor performing an abortion.

“He was taking surgical instruments and a fully grown human child and basically dissecting it and saying: ‘Look, this is abortion, this is what you’re doing to your baby,’” she said.

The center’s staff also told her she couldn’t get a medication abortion in Texas. It wasn’t true, but Aziz didn’t find that out until after she had paid to travel to Colorado Springs to get the abortion pills.

She said the whole experience was so jarring that she devoted her life to telling people about it. She’s now a community organizer for the Texas Equal Access Fund, a group that advocates for abortion access.

“I try to educate people on the facts and how they manipulate and exploit folks and coerce them into carrying unwanted pregnancies to term,” she said.

She said part of her concern is that her tax dollars are helping fund these centers.

“I think there are about 16 states that do have grant programs that publicly fund the centers,” she said.

Christian anti-abortion group Human Coalition helps run about 45 crisis pregnancy centers around the country, including in Texas, where Aziz lives. According to the group’s financial records, almost half of its operating revenue came from government funding.

“In the state of Texas. There’s $100 million allocated for now to serve women in need and in fact I’m already hearing talks about increasing that number,” said Chelsey Youman, the group’s legislative advisor.

Youman said that money helps connect pregnant women with resources including medical care, housing, and sometimes food. She also doesn’t think the Supreme Court’s overturning of Roe will decrease the demand for their services.

“Absolutely not, of course not. No, actually, the funding is in place for this moment,” she said.

Many centers offer some free supplies to mothers who keep their babies, things like baby clothes, diapers, wipes and strollers.

But to get them, mothers might have to commit to classes or Bible study. Abby Friend lives in Forest, Ohio. She has two young daughters and said she visits the nearby Voice of Hope Pregnancy Center fairly often for supplies.

“I basically just go on there and watch videos, we talk about it, everything that we need to pray about. And then I go into like the little store and get the baby stuff,” she said.

She said her experience with the crisis pregnancy center has been a positive one and that she probably couldn’t afford the stuff she gets there on her own.