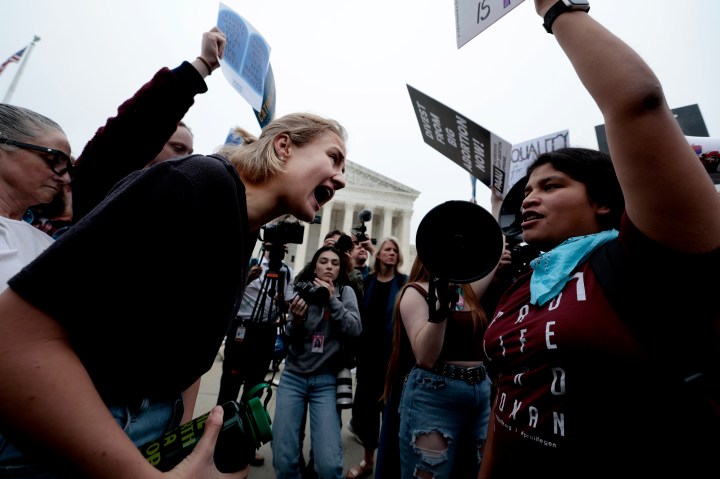 David Brancaccio and Rose Conlon May 9, 2022

Last week, several hours before a draft Supreme Court decision that would overturn Roe v. Wade was leaked, the abortion rights groups Planned Parenthood Action Fund, NARAL Pro-Choice America and EMILY’s List announced that they would spend $150 million in nine key states ahead of the 2022 midterms — more than double their spending during the 2020 elections. Data from the nonprofit OpenSecrets shows that anti-abortion groups have also ramped up spending in recent years, although to a lesser extent.

But increased spending by abortion-rights groups doesn’t always correlate with political outcomes, according to Mary Ziegler, a visiting professor at Harvard Law School and author of a forthcoming book about the anti-abortion movement.

“It’s hard, especially for the abortion-rights side, to translate those dollars into action; into votes,” she said in an interview with Marketplace’s David Brancaccio.

“The question now is, when we’re at a point of sort of existential crisis for the abortion-rights side — where states are moving toward not just criminalizing the actions of doctors [but] maybe the actions of patients; maybe defining abortion really broadly — is that a turning point? Can then those dollars actually translate into something more than they have in recent decades?”

Ziegler spoke with Brancaccio about the political funding landscape surrounding the abortion debate and how an expected Supreme Court decision to overturn Roe v. Wade could alter it. The following is an edited transcript of their conversation.

David Brancaccio: When you look at the numbers broad-brush, it appears like the abortion-rights groups are doing a lot more spending than the anti-abortion groups are this time around. Is that your sense, too?

Mary Ziegler:  It is my sense, too. And it accords with what we know historically, which is that abortion-rights groups tend to do well in moments of crisis. A lot of people couldn’t believe there would be a moment when the Supreme Court would reverse Roe. And when those moments seem to come, there’s often a tremendous amount of money that pours into abortion-rights groups; elections for candidates who could support abortion rights. So this is in keeping with what we’d expect.

Brancaccio: Anti-abortion groups have certainly been spending and dedicating resources — perhaps not as much this year compared to the other side, but it’s certainly been an enduring campaign where money has changed hands.

Ziegler: Absolutely. And one of the more interesting things I think about the anti-abortion side is that they’ve been pretty sophisticated — not just in raising money for themselves, but they’ve helped to pilot some of the campaign finance strategies we see unfolding: nonprofits, dark money. Some of the major players in the fight against campaign finance laws have been in the anti-abortion movement. So I think if you’re looking at that story, it goes beyond just the numbers you see coming into the major anti-abortion groups.

Brancaccio: Dark money is something we cover on this program, where organizations can donate to campaigns, but they don’t have to reveal who their actual donors are.

Ziegler: Absolutely. And that’s important particularly for anti-abortion groups, because they’re trying to sometimes tap major donors in blue states; people who want to be able to give to groups they support without potential blowback from their neighbors or their broader communities. So a lot of these pieces are connected, and that’s especially true when you’re dealing with an issue like abortion — that’s controversial and where people may not want to disclose to their communities what they think about that issue.

Brancaccio:  I should say that in 2020, that election year, the Democrats were no pikers in using dark money in campaign financing. The Democrats surpassed the Republicans — not necessarily abortion/anti-abortion, but in conservative/liberal.

Brancaccio: Anti-abortion groups have been very astute at financing state and local elections — perhaps with a greater focus than abortion-rights groups, do you think?

Ziegler: I think that’s absolutely fair. I think if you look at where the action has been in abortion politics in recent decades, it’s really been in the states. And then if you look at where sometimes you see dollars focused and messaging focused on the pro-choice side or the abortion-rights side, it tends to be on national races. So I think they’ve been kind of out-organized and out-strategized — in the money race and in the broader politics race at the state level. And we’ve seen the fruits of that, really, since the 2010 midterms when Republicans took control of so many state legislatures for the first time and used those state legislatures as sort of laboratories for new restrictive abortion policies.

Brancaccio: Does spending correlate with outcomes?

Ziegler:  Not necessarily. I think there’s been an advantage on the pro-choice side, usually, in spending, and yet here we are where Roe v. Wade is going to be overturned. Now obviously Roe v. Wade being overturned has to do with lots of things beyond spending, so it’s an oversimplification to say that spending doesn’t work. At the same time, I think we’ve seen that, in some instances, politicians are catering here to what they perceive to be the voters who care the most about this issue; the voters who actually pick candidates based on their views on abortion, rather than the median voter who’s probably more likely to support abortion rights but may not, ultimately, care as much. So sometimes it’s hard, especially for the abortion-rights side, to translate those dollars into action; into votes. And the question now is, when we’re at a point of sort of existential crisis for the abortion rights side — where states are moving toward not just criminalizing the actions of doctors [but] maybe the actions of patients; maybe defining abortion really broadly — is that a turning point? Can then those dollars actually translate into something more than they have in recent decades?

Brancaccio: Any early takes on how what seems to be emerging from the U.S. Supreme Court right now will change the funding landscape regarding abortion in America?

Ziegler:  Yeah, it’s likely that we’ll see another surge in funding for abortion-rights groups. I think a lot of people who support abortion rights have sort of thought of abortion rights as an issue they didn’t really need to think about —something they could table while they focused on, you know, global warming or access to the vote or whatever — are now going to see abortion as a kind of top-line, urgent issue. And I would expect to see that translate into a lot of donations. Again, I think the game changer is whether those donations turn into political outcomes. And for that, we’ll have to wait and see.