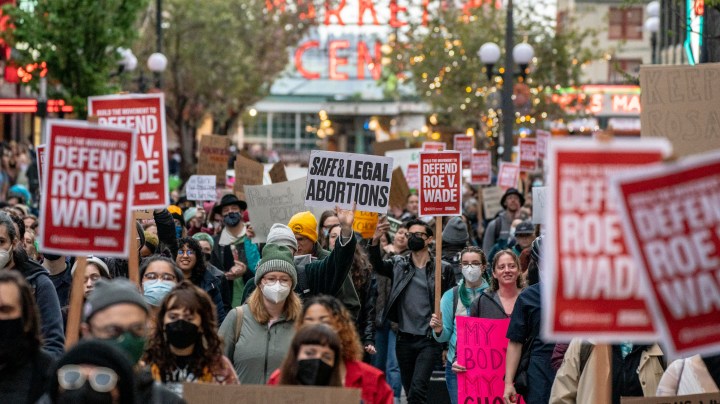 COPY
If Roe v. Wade is overturned, more pregnant people will be unable to work, which could have larger economic ramifications. David Ryder/Getty Images

If Roe v. Wade is overturned, more pregnant people will be unable to work, which could have larger economic ramifications. David Ryder/Getty Images
Listen Now

If the U.S. Supreme Court overturns Roe v. Wade, as the draft opinion leaked Monday suggests it will do, more people will be forced to continue with unplanned pregnancies. That will have financial ramifications for those individuals immediately — and for the entire economy in the long term.

Laurie Bertram Roberts has given birth to seven children. All of them were unplanned pregnancies.

“I have a condom baby and I have a vasectomy baby,” they said. “My mom was like, ‘Just don’t even shower with the same soap as a man, please.’ Because every time I turned around, I was pregnant.”

Bertram Roberts had twins at 16, was pregnant again at 19 and couldn’t afford an abortion. After dealing with pregnancy complications and being homeless for a while, they eventually finished school and now run the Yellowhammer Fund, which provides aid for abortions in the Deep South.

But Bertram Roberts’ own financial difficulties lasted a long time. “In the last two years, we just got out of poverty. And I’m 44.”

Research shows Bertram Roberts’ economic experience is not unusual. A study by Diana Greene Foster of the University of California, San Francisco, found that people who sought an abortion and were turned away were four times as likely to live below the federal poverty line as those who did get abortions.

And when these individuals can’t work, there are ramifications for the whole economy, according to Sarah Miller, who teaches business at the University of Michigan. She worked with Foster to study financial outcomes for women who’ve sought abortions.

“If you have a scenario where you have large swaths of women who no longer have control over their fertility — especially right now when a lot of employers are finding it difficult to hire — you could imagine that that would have consequences for businesses as well,” she said.

Some opponents of abortion argue there should be more financial help for parents.

“There’s a responsibility for policymakers to be thinking about subsidizing the cost of parenthood and making it easier for people to balance having a kid and, you know, being in school or being employed or having a more flexible work-life arrangement and those sort of things,” said Patrick T. Brown, a fellow at the Ethics and Public Policy Center.

Brown supports the child tax credit and expanding child care options. In other words, when one branch of government acts, it’s time for another branch to step up.