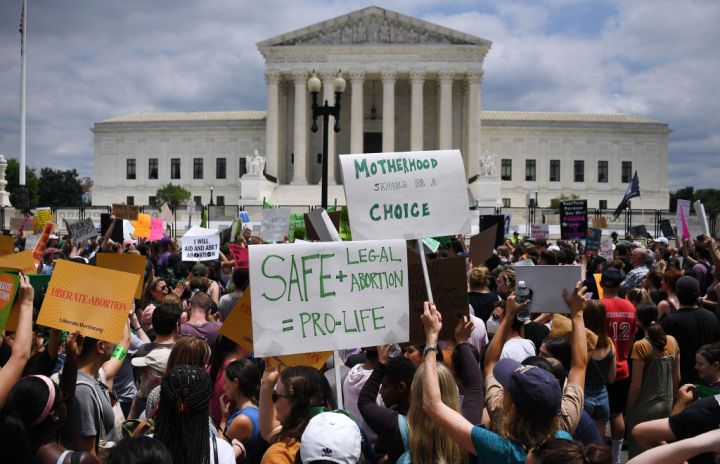 COPY
Abortion-rights activists demonstrate in front of the U.S. Supreme Court on Friday after the court's ruling was announced. Olivier Douliery/AFP via Getty Images

Abortion-rights activists demonstrate in front of the U.S. Supreme Court on Friday after the court's ruling was announced. Olivier Douliery/AFP via Getty Images
Listen Now

The Supreme Court’s 5-4 decision to overturn Roe v. Wade won’t just mean less access to abortion care or higher costs associated with it. In the long term, it may also shape the economic future for generations of Americans.

“I think the effects are likely to get bigger over time,” said Jason Lindo, a professor of economics at Texas A&M University. “Each year, there will be tens of thousands of people whose lives will be altered permanently because they’re put on a different life course as a result of having a child sooner than they would have otherwise, or having an additional child.”

Lindo has studied the effect that abortion access has on educational attainment, and his research was included, along with that of 153 other economists and researchers, in an amici curiae brief examining the economic impact of overturning Roe v. Wade. The brief was filed last fall, when the Supreme Court heard arguments for Dobbs v. Jackson Women’s Health Organization, the case in which the court voted to negate the historic 1973 decision.

“Given who we expect to be most disproportionately affected by these bans on abortion,” Lindo said, “we can expect the existing disparities in economic outcomes to grow.”

Lindo discussed Friday’s Supreme Court ruling and its economic fallout with “Marketplace” host Kai Ryssdal. The following is an edited transcript of their conversation.

Kai Ryssdal: So with the caveat that obviously we’ve had an inkling that this was going to be the ruling for a while now, when you read it this morning in its official form, what were your quick thoughts?

Jason Lindo: Kind of that, ‘This is happening.’ I think in anticipation, a lot of social scientists and researchers in other fields have been trying to predict what they think is likely to happen. And now it’s time that we will probably see these things unfold.

Lindo: Yeah, absolutely. It touches on economic issues in so many ways, it’s hard to know where to get started. At the most basic level, I would say that having children is extremely expensive. It’s expensive, both in terms of time and money. And so a lack of these resources certainly means that households can be thrust into poverty if they have children sooner than they want to, or perhaps more children than they want to.

Ryssdal: The catch, of course, is that this story is about not having children. So what happens downstream from people who, who lose access to these reproductive rights?

Lindo: To set the stage, I guess I would say an important piece of the context is that folks seeking abortion disproportionately come from disadvantaged groups already. That being said, we know that the individuals who are negatively affected by not being able to obtain abortions, they are made more disadvantaged economically as a result of not being able to access abortion. And they’re made more disadvantaged both in their economic circumstances and in their educational circumstances. And that happens because many of these people seeking abortions are in the middle of their educational careers, or they’re early in their professional careers, and disruptions to those careers can be pretty costly.

Ryssdal: Let’s be plain-spoken here. When we speak about people who are economically disadvantaged to begin with, we’re talking about lower-income women, women of color, who are challenged in getting access to this care in the first place.

Ryssdal: What happens to these women then with regard to say, education? Are they, are they able to go to school? Do they suffer if they go to school? How does that affect their job prospects? I know, that was a three-part question, sorry.

Lindo: Sure. You know, some of them may be able to sort of overcome the additional challenges of continuing in school, despite pregnancy, but we definitely know from a large body of rigorous empirical research that many have their educational careers cut short as a result of continuing the pregnancy and having a child.

Ryssdal: So this is gonna sound like a really stupid question, and bear with me, but why does this happen? Why is it women of color and women of lesser means who are more affected? And I get that it sounds stupid as I’m saying it, but I think it’s important to point out.

Lindo: That’s a good question. And I think there’re probably multiple reasons, like many childbearing and abortion decisions are determined by lots of factors. But I would say, a very, very large number of individuals state that they are having an abortion due to economic considerations.

Ryssdal: In a macro sense, this is in a lot of ways a labor force story, right? So as these women who are not able to access reproductive services enter the labor force and then have to leave the labor force because they get pregnant and are now raising children, what happens to them down the line, when in theory, they’re supposed to be making money to pay for those kids and also the kids’ education and eventually their own retirement?

Lindo: Yeah, no, I appreciate the context there. Because I think it’s always important to think about the short-term and the long-term costs. And in this case, of course, you know, during pregnancy, people expect there to be time off. But here we’re talking about disruptions to people’s careers that have long-run effects throughout their entire careers, such that we would expect them to ultimately, over their entire lifetime, to earn less. And as we think about the long-run effects on individuals, we also need to think about the children who are growing up in the households with these people who have more impaired access to abortion because we know that household resources are a really important determinant of children’s own economic success. And so the economic effects are actually likely to extend into the next generation as well.

Ryssdal: Hearing that answer, it occurs to me that there is a whole lot of “eventually” in this conversation, right? Because eventually these things are going to happen. They’re not happening tomorrow, but eventually we’re gonna see this.

Lindo: Yeah, that’s a good point. Absolutely, I think the effects are likely to get bigger over time. Each year, there will be tens of thousands of people whose lives will be altered permanently because they’re put on a different life course as a result of having a child sooner than they would have otherwise or having an additional child. And so with each passing year, there will be more and more people who are on this altered path that involves lower levels of education, lower labor force participation and poor economic conditions generally. And so the overall economic effects, like you said, will grow over time, as the number of people on this alternate path grows over time.

Ryssdal: So let me ask you to take off your economist hat for a second and think as a pure public-policy guy, if what you just described happens, what does that mean for the American body politic and body social, if you will, right? Because now we’re going to have lower-class women and women of color not having access, white women and women who have means having access. It’s going to be separated by state. You can see the divisions. What do you think when I frame it that way?

Lindo: I think definitely, given who we expect to be most disproportionately affected by these bans on abortion, we can expect the existing disparities in economic outcomes to grow.