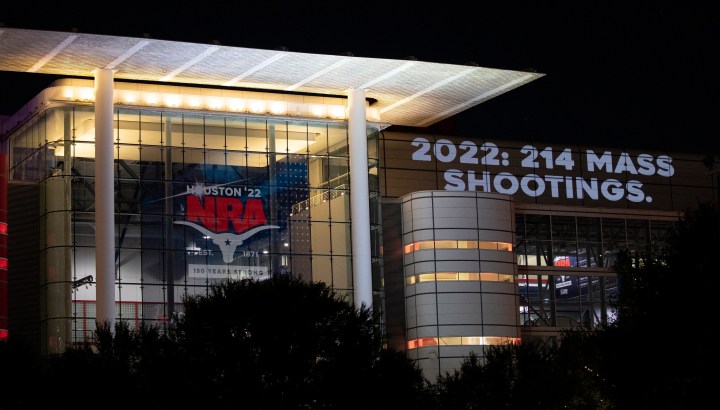 As this year's NRA convention was underway in Houston, Texas, image of the number of mass shootings throughout 2022 was projected on the convention building. Bob Levey/Getty Images for MoveOn

As this year's NRA convention was underway in Houston, Texas, image of the number of mass shootings throughout 2022 was projected on the convention building. Bob Levey/Getty Images for MoveOn

The National Rifle Association is a “social welfare organization” in the eyes of the Internal Revenue Service. Its 501(c)(4) designation means the NRA can endorse political candidates, engage in unlimited lobbying and allow its donors to remain anonymous. It also means it’s exempt from federal income tax.

The social welfare organization designation is puzzling to gun-control advocates, who have condemned the organization for helping block gun reform through its political influence on the Republican party (although its power has begun to wane).

Each heavily publicized mass shooting renews calls for gun reform, yet these attempts have failed to translate into substantive new legislation. The latest calls for reform come after a May 24 shooting, when a gunman entered an elementary school in Uvalde, Texas, killing 19 children and two adults. Just 10 days earlier, another gunman killed 10 people at a supermarket in Buffalo, New York.

There have been more than 250 mass shootings in the U.S. this year alone. Among developed countries, America leads in gun deaths (including accidents and suicides).

To weaken the NRA, organizations like Call to Activism have one solution: revoke its tax-exempt status. They’ve circulated petitions to garner support or encouraged the public to file complaints with the IRS.

Congress members, like New Jersey Sen. Bob Menendez, have also called on the IRS to investigate the NRA for allegedly violating laws that govern tax-exempt organizations.

Experts, however, say that would be an uphill battle.

What would disqualify the NRA from its tax-exempt status?

While political groups have proposed different methods to nullify the NRA’s status and hold the group accountable for its actions, they’re likely to be ineffective.

“Groups of all sorts of persuasions and political positions” are classified as 501(c)(4)s, Mayer said. The federal government can’t choose which organizations are granted tax-exempt status based on their viewpoints because of the First Amendment’s guarantee of freedom of speech.

So for the NRA to lose its status, it would have to actively promote illegal activity, like encouraging its members to violate gun laws, Mayer explained.

“Civil disobedience, in other words, would disqualify them from tax-exempt status,” Mayer said. The publication Vox argues that while the NRA uses inflammatory, “paranoid” rhetoric to bolster its message, its ads are never an “outright exhortation to violence.”

Mayer said that if gun companies were found to be running the NRA as a shadow lobbying group — that is, doing lobbying work without registering as a lobbyist with the legislature — that might also warrant disqualifying the group from its tax-exempt status. The NRA conducts political activity through a lobbying arm called the Institute for Legislative Action and its political action committee, the Political Victory Fund, which donates money to candidates who support gun rights.

501(c)(4)s can also lose their status on the grounds of too much political activity (participating in political campaigns), which is different from lobbying (trying to influence legislation), Mayer said.

“And as politically active as the NRA is, it does a lot of other things. So it’s unlikely to be vulnerable in that regard, either,” Mayer said. The organization offers firearm training courses, provides gun ranges for its members and hosts expos.

In 2010, the Supreme Court’s Citizens United decision allowed 501(c)(4)s to run political ads about federal candidates and removed spending limits for corporations and unions on political donations. But there have been efforts to curb the involvement of 501(c)(4)s in politics.

In 2013, the Obama administration’s Treasury Department proposed regulations to limit the role of 501(c)(4)s in political campaigns, said Nicholas A. Mirkay, a law professor at the University of Hawai’i at Manoa. If these rules were codified, and if the NRA subsequently violated them, that would be the easiest way for the NRA to lose its status, Mirkay explained. But so far, they’ve been stalled after pushback from congressional Republicans.

How much does its tax status matter to the NRA?

The NRA has been facing financial trouble, which could reduce its tax liability if it were to lose its exempt status.

In a 2019 piece published in the New Yorker and The Trace, writer Mike Spies detailed the financial woes and infighting plaguing the gun-rights group, including a breakdown in the relationship between the NRA and its public-relations firm, Ackerman McQueen.

“Even if they were a taxable corporation, they would be paying little to no tax anyway,” Mirkay said.

Mirkay said he thinks the organization would be able to survive, fight the revocation, and even rectify the issues within the organization that led to the loss of the status in the first place.

He pointed out that organizations are typically given an advance warning, with the ability to correct course.

But while its tax-exempt status seems safe for now, the NRA finds itself mired in lawsuits, with the top legal officers from both Washington, D.C., and New York pursuing action against the organization.

New York’s attorney general, Letitia James, filed a lawsuit against the NRA, accusing the group of illegally using funds for expenditures like personal trips. James attempted to dissolve the group —  a move that was blocked by a judge who will nonetheless allow the suit to continue.

Mayer also pointed out that the NRA Foundation, a 501(c)(3), may be at risk even if the NRA itself isn’t. The District of Columbia’s attorney general is suing the NRA Foundation for allegedly “misusing charitable funds to support wasteful spending by the NRA and its executives.”

The office of D.C.’s attorney general says that the NRA was able to use the foundation to take on multimillion-dollar loans, including a $5 million loan the group hasn’t repaid, and accepted millions in fees without documenting how they’d be used for “charitable purposes.”

To hold these groups accountable, the office wants better policies to ensure the two groups remain separate, and supervision over their financial decisions.