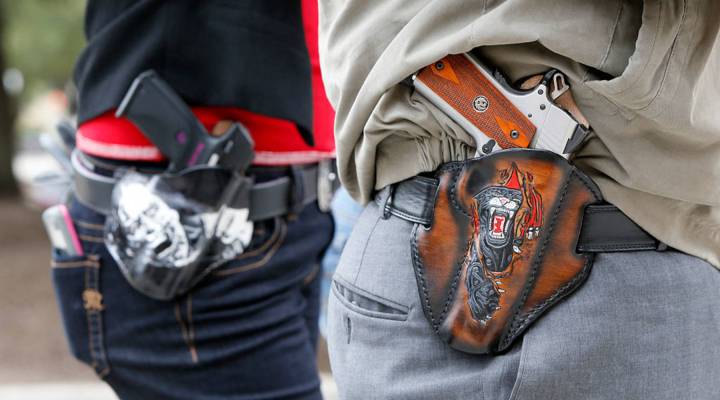 From medieval times on it was always popular to carry a weapon and engage in duels. Then after Jesse James and criminals like that, firearms seemed to disappear from the side of everyone’s hips. What was the cause and why are they now making a comeback? Is it due to the powerful NRA and gun lobbies?

Gunslingers meeting in the middle of a town square at high noon was not exactly an everyday occurrence in the Wild West. Sure, it’s not what Hollywood would have you believe but the Wild West was actually not that wild.

Consider this: The first wave of gun control laws swept through the nation in the early 1800s. According to Adam Winkler, the author of “Gunfight: The Battle Over the Right to Bear Arms in America,” the first version of gun control was intended to reign in “violence-prone men who were a bit too eager to defend their honor by whipping out their guns.” Kentucky and Louisiana banned possession of concealed weapons in public as early as 1813.

Later on, some towns went as far as to force all gun owners to check in their guns upon arrival in town so as to prevent gun fights, according to Robert Dystra, author of “The Cattle Towns.” When entering the town of Wichita, Kansas, a sign told visitors to “leave your revolver at police headquarters, and get a check.” Another sign in Dodge City, Kansas read: “The carrying of firearms is strictly prohibited.” Enforcement of a similar law in Tombstone, Arizona, led to the infamous gunfight involving the Earp brothers and Doc Holliday at the O.K. Coral. Almost 30 shots were fired during the shootout that lasted about 30 seconds and left three dead and three wounded.

“Carrying of guns within the city limits of a frontier town was generally prohibited. Laws barring people from carrying weapons were commonplace, from Dodge City to Tombstone,” Winkler told the Washington Post in 2014. “When Dodge City residents first formed their municipal government, one of the very first laws enacted was a ban on concealed carry. The ban was soon after expanded to open carry, too. The Hollywood image of the gunslinger marching through town with two Colts on his hips is just that — a Hollywood image, created for its dramatic effect.”

The answer to the second part of the question, if and why openly carrying guns is making a comeback, is a lot less clear. There is no simple answer as there are no official statistics about gun ownership in the U.S. nor about how many gun owners choose to open carry. Currently, there is no federal law prohibiting openly carrying a gun in public. As such, it has fallen to states to make their own policies. Just five states — California, Florida, Illinois, New York, South Carolina — and the District of Columbia, prohibit openly carrying handguns in public places. Texas had banned open and concealed carry in the past, but has since reversed that law. It is now one of fifteen states that require gun owners to have a permit or license to openly carry a gun. Thirty-one states have no open carry laws on the books when it comes to handguns.

“Most states actually allow it,” said Laura Cutilletta, legal director at Law Center to Prevent Gun Violence. “Most states are actually silent on the issue, because — to be honest — it’s just not something that people physically do very often.”

One of the reasons it does not happen often is because people tend to get alarmed when they see a gun out in public as they are not aware that open carry is widely allowed, explained Cutilletta.

Since most states do not require a license to openly carry a gun, there are no official numbers for how many people carry their guns with them when they are out and about. The Pew Research Center recently surveyed about 1,269 gun owners and found that about seven in 10, or 72 percent, own handguns.

A spokeswoman for the Pew Research Center told Marketplace that this is the first time it has asked that question. As a result, there is no way to compare whether the number of people carrying handguns with them is on the rise.

Another way to try to determine whether more people are carrying their guns with them is to look at the sale of gun holsters. While gun holster sales are not officially tracked, most people Marketplace spoke with said that as firearm sales have increased so have the sales of gun accessories.

“Holster sales typically increase when concealed carry and open carry laws become less strict,” explained Torsten Edstam, a procurement research analyst at IBISWorld, a market research firm. “As laws become looser, more people buy handguns and then need the means to carry them. For example, in 2015, Maine enacted the ‘constitutional carry’ law, which authorized gun owners to carry concealed handguns without permits. According to gun store owners, this change in the state’s laws prompted an increase in the sale of small, concealable pistols and the holsters used to carry them. That same year Texas legalized open carry for concealed handgun permit holders. After the law went into effect in January 2016, gun stores in the state also reported a significant rise in holster sales.”

Demand for holsters is closely linked to handgun sales because users wear handguns but not long guns like rifles and shotguns, Edstam pointed out. (Some states have separate open carry laws for long guns and handguns.)

For a number of years, up until November of last year, guns sales were on the rise — a trend that benefited gun and holster manufacturers. Increases in gun sales were driven in part by multiple mass shootings followed by calls for stricter gun controls by President Barack Obama. Afraid that their ability to purchase firearms might be restricted in the future, some Americans made sure to purchase guns before any hypothetical restrictions could take effect.

Obama was the “greatest gun salesman,” said Gene DeSantis, founder and CEO of DeSantis Gunhide, which sells close to a million holsters a year to gun stores, law enforcement, military and individual consumers. As sales of guns went up under Obama, so did the sales of DeSantis holsters. And, according to the NRA, so did the number of gun owners.

“It could be that this listener is noticing that more individuals are carrying because there’s frankly more gun owners in the United States now than there has been ever before,” Jason Brown, a spokesperson for the NRA, told Marketplace. “Gun sales have set records year after year for about the past 10 years.”

“It’s to defend yourself,” agreed DeSantis, who owns and carries a gun for that reason. “I try never to leave home without a gun. There are certain restrictions, obviously  — and we have to abide by the law — but wherever it’s legal to carry a gun, I do so.”

Another possibility is that more gun owners might be openly carrying guns at the moment because they feel they have an ally in the White House.

“It’s kind of like: ‘We aren’t worried now that they are going to get taken away and we want to actually flaunt the fact that we don’t have to worry about that and that we have a supporter in the White House,’” said Cutilletta, of the Law Center to Prevent Gun Violence. Though she added that there is no data to prove that such a flaunting effect is taking place.

Then-Republican presidential candidate Donald Trump appeared with Wayne LaPierre at the NRA Convention on May 20, 2016 in Louisville, Kentucky.

Trump has been outspoken in his support for the second amendment. While running for office, Trump spoke at the NRA Convention and was photographed with Wayne LaPierre, NRA’s CEO. But as a result, gun sales — which have surged under Obama — have dropped off since Trump took office and are expected to remain lower this year than in 2016. So even if the listener is seeing more people openly carrying guns, that does not mean that gun sales under Trump have flourished.

Since November, sales of firearms, ammunition and accessories such as holsters have all gone down, according to Edstam, the IBISWorld analyst.

“According to FBI statistics, background checks for firearm purchases reached record highs in 2016 but have dropped precipitously since then. While there were 2.5 million background checks for gun sales in January 2016, January 2017 only saw 2 million checks. In fact, IBISWorld estimates that total revenue for the guns and ammunition manufacturing industry in the US will drop 10.1 percent this year from its high point in 2016,” he said. “With the Trump administration and Congress vowing to protect gun rights, people have felt less pressure to go out and buy firearms. As gun sales have fallen in recent months, demand for holsters and other accessories has dropped as well.”

DeSantis, the holsters manufacturer, is not worried about the drop off in sales. According to him, there was a spike in sales last year while polls predicted that Hillary Clinton would be elected as the next U.S. president.

“The panic buying is over,” he said, adding that he doesn’t expect sales of holsters to slow down. “We won’t move quite as fast as we did under President Obama, but we are going to keep going, yes. Absolutely. It’s a growth industry.”