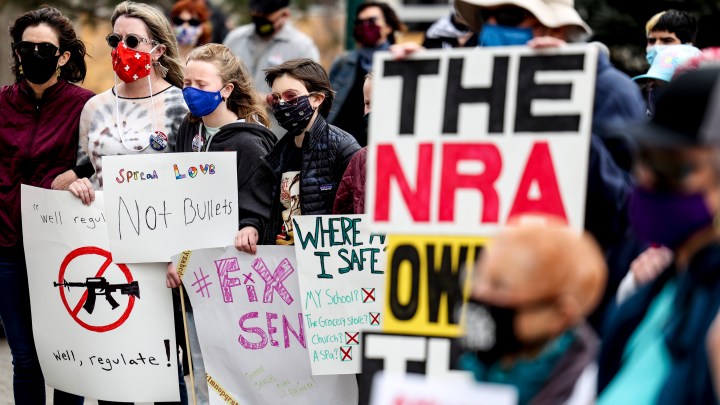 COPY
Though gun control advocates are heavily outspent by gun rights groups, pressuring corporations to cut ties with gun rights groups could be one potential route to success for them. Michael Ciaglo/Getty Images

Though gun control advocates are heavily outspent by gun rights groups, pressuring corporations to cut ties with gun rights groups could be one potential route to success for them. Michael Ciaglo/Getty Images
Listen Now

President Joe Biden has called on Congress to stand up to the powerful gun lobby, after the shooting west of San Antonio that left 21 people dead, including 19 children.

Over the last two decades, groups such as the National Rifle Association and Gun Owners of America have far outspent groups that advocate for gun control. But groups that support gun restrictions still have some tools at their disposal.

Gun control organizations have been spending more in recent years.

“In terms of lobbying, gun control groups spent $2.3 million in 2019. … And they’ve spent more than $2 million in each of the last two years since then,” said Sheila Krumholz, executive director of OpenSecrets, which monitors money and politics.

There have also been some new entrants on the gun control side with more resources, she said.

That includes a group founded by former New York City mayor Michael Bloomberg, called Everytown for Gun Safety, “which has spent millions of dollars in recent years — they really make up the bulk of the increased spending by gun control groups recently,” said Krumholz.

Many gun control organizations have been trying to focus their spending on states where gun reform legislation is more likely to pass, according to UCLA law professor Adam Winkler.

“We’ve seen a number of states restrict military-style assault rifles, high capacity magazines, and adopt red flag laws, making it easier to take guns away from someone who is in the midst of the crisis.”

In recent years, gun control advocates have also been pressuring corporations to cut ties with gun rights groups. That can be effective, said Allen Rostron, a professor at the University of Missouri-Kansas City and a former attorney with the Brady Center to Prevent Gun Violence.

“It raises awareness to the issue and makes some corporations think about what they’re supporting and what they’re doing,” he said.

“There’s always been pretty good data on the number of deaths from firearms, but not very good data on non-lethal injuries. How many are there, for example,” he said.

And while Congress has been funding some research in recent years, Rostron said it could certainly do more.

Clarification (May 27, 2022): This story has been updated to clarify the amount of money gun control groups have spent on lobbying.