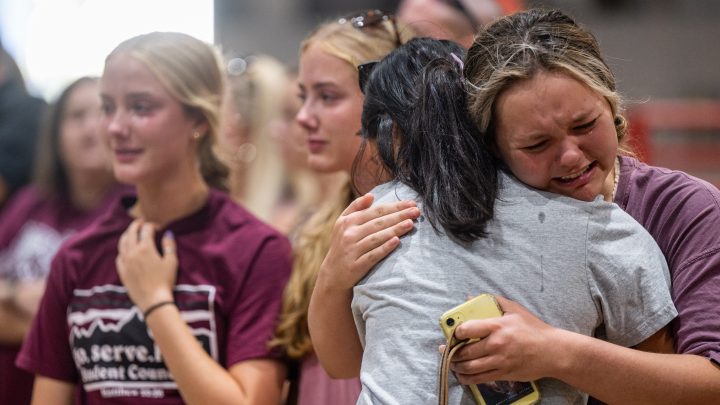 COPY
Community members mourn during a vigil for the 21 lives lost in the attack at Robb Elementary School in Uvalde, Texas. Brandon Bell/Getty Images

Community members mourn during a vigil for the 21 lives lost in the attack at Robb Elementary School in Uvalde, Texas. Brandon Bell/Getty Images
Listen Now

So far, in 2022, there have been 27 shootings at U.S. schools that resulted in injuries or deaths. In addition to the human cost of those events, gun violence at school has economic consequences for survivors.

According to a working paper published by the National Bureau of Economic Research, the trauma of school shootings can undermine students’ academic performance and employment prospects later in life.

The following is an edited transcript of Schwandt’s conversation with Ryssdal.

Kai Ryssdal: Let’s break this down then into two categories of effect, right, which you talk about in this paper: short-term and long-term. In the short term, the first months and years after a school shooting, what happens? What do you find?

Hannes Schwandt: So, we find that students who witness shootings are more likely to be chronically absent and also be more likely to be held back in the grades for two years after the event. And what’s important here is that the shootings that we study, and, in the context of Texas actually, are shootings that are not as deadly as the, you know, current mass shootings or other mass shootings that, you know, receive a lot of publicity in the media. But we are looking at shootings that have not more than one death, and in some cases, no fatality at all. And we find that even though these are less deadly shootings, they have these very strong impacts on students who witnessed that shooting.

Ryssdal: What I hear you saying then is that the mass shootings are terrible and have horrible, lasting effects. “Everyday” gun violence in schools also has effects, even though we don’t hear about them, and we don’t read about them that much.

Schwandt: Exactly. And so we talked about the short run, but we also were, in our data, able to follow students over a longer time period, and we see long-term educational and economic negative impacts. We see that students witnessing a shooting, they’re less likely to graduate from high school, they’re less likely to go to college, and once they enter the labor market, we find they’re less likely to be employed and they also have lower earnings in their mid-20s. That’s you know, the oldest age that we can see them. And overall, you know, when we make a calculation, like, what do these earnings effects imply in terms of, like, lost lifetime income, right, given that they seem to be very persistent? We calculate that over the course of a lifetime, the exposure to a shooting leads to a loss of almost $120,000 in lifetime income.

Ryssdal: If you could get all 100 members of the United States Senate in a room, professor, what would you tell them about your research and what might be best for the economic outcomes regarding gun violence in schools?

Schwandt: So, I guess, the first important aspect is that the current resources devoted to school shooting survivors — so those who have witnessed a school shooting — are not sufficient to buffer against the education, economic losses. Mental health, in general, is very important for people’s economic productivity. It’s often more important, actually, than physical health. So that’s one important issue. The other important issue is, of course — I mean — we have to try to prevent shootings. Mass shootings, of course, that’s the very first priority, but even like the shootings that are less deadly, that might not even be really on the radar of the public debate. Even those shootings can be very harmful.

Ryssdal: So look, speaking about mental health, actually, and I’m going to ask you a personal question here, and you can, you can tell me to go pound sand if you want to. But you’re a trained economist, you study human development and social policy, and you do this very difficult research. And I guess I wonder what your reaction was when you heard the news out of Uvalde, Texas, the other day?

Schwandt: Yeah. I think my first reaction is just, like, you know, everybody. It’s just like — regardless of the research that you’re doing — speechless, and being so horrified. I have a 1½-year-old myself now. Just thinking that your children could be in that situation, could be murdered, could witness the murder, I mean it just leaves you speechless and so sad. Of course, you know, then you get requests like this one from the media to talk about it, and I think that it’s very difficult. At the same time, you think, like, “OK, we have been working on this because we think it is important, and it is tragic, and we need to analyze more what it actually means and what are the full cost of those events, right?” You know, to quantify the harms that are done and the damages and the scars left in those children.