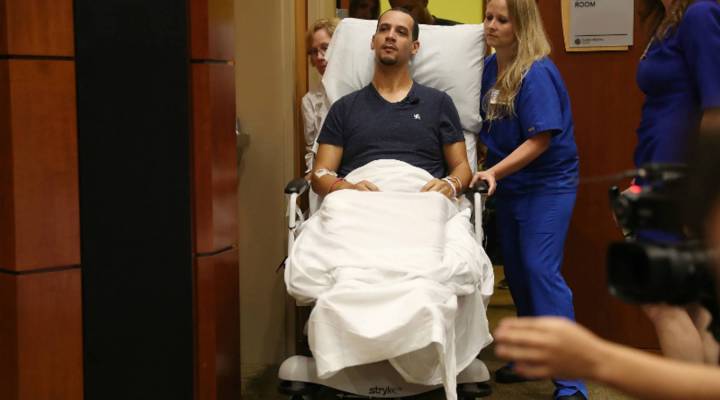 COPY
Angel Santiago arrives to speak to the media from Florida Hospital about being shot in the Pulse gay nightclub terror attack in Orlando, Florida. Joe Raedle/Getty Images

Angel Santiago arrives to speak to the media from Florida Hospital about being shot in the Pulse gay nightclub terror attack in Orlando, Florida. Joe Raedle/Getty Images
Listen Now

On Friday, the National Academies of Science will release a report assessing the quality of trauma care in the United States.

This comes less than a week after dozens of people fled to the Orlando Regional Medical Center to get treatment for gunshot wounds sustained during Sunday’s mass shooting at a gay nightclub.

The study suggests many of our hospitals are unprepared for growing threats like mass shootings and bombings.

Writing in the New England Journal of Medicine in 2006, ER Physician Arthur Kellermann wrote, “America’s emergency and trauma care system has deteriorated to an alarming degree.”

“That statement is as true today as it was 10 years ago,” said Kellermann, who is now dean at the Uniformed Services University’s School of Medicine, the military’s medical school.

“The threat has only grown,” he added. “The need for preparedness has only grown. Our national response has not matched the increase in the threat.”

Kellerman said too many hospitals in the country – including Level 1 trauma centers like the one people sought out in Orlando – lack the training, equipment and physical capacity to handle unexpected events.

Those inadequacies lead to wide variations in the quality of care, said University of Maryland’s Dr. David Marcozzi.

“Right now, in trauma care, where you live determines if you live,” he said.

The Academies of Science report found in 2014 that about 30,000 trauma deaths may have been prevented if hospitals and first responders had provided optimal care.