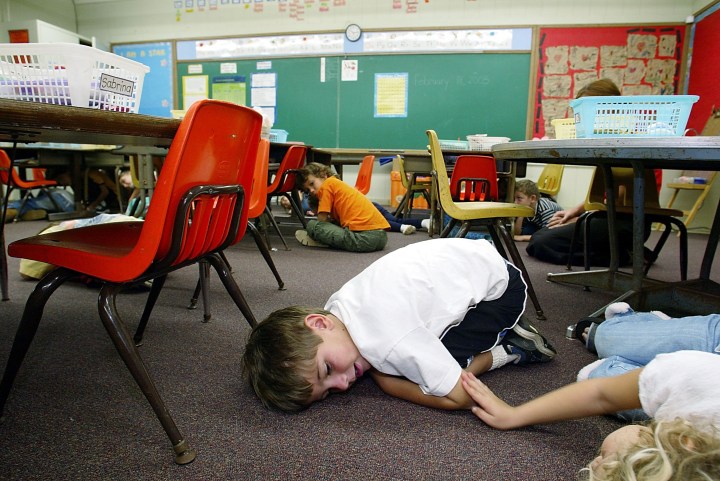 There have been at least 20 mass shootings in the U.S. over the past three weeks. And every day in the United States, 22 children and teens are shot, according to Brady, a gun violence prevention organization. Washington Post reporter John Woodrow Cox’s new book, “Children Under Fire: An American Crisis,” looks at the toll that gun violence takes on children. Click the audio player above to hear “Marketplace’s” Amy Scott talk to Cox.

The following is an excerpt from the book about the nearly $3 billion market (excluding armed police officers) for school security that has emerged in response to campus shootings.

On a sultry Florida afternoon, hundreds of superintendents and principals ﬁled down the hotel’s hallways as they neared a sign advertising another conference later in the year. Active school shooters, it read, above a photo of an armed man approaching a half-dozen children at their lockers. Most of the passing educators didn’t seem to notice. It was the expo’s opening night, and just beyond the sign, inside a sprawling chandeliered ballroom, a band played Jimmy Buffett covers to the rhythm of a steel drum.

Waiters in white button-downs poured glasses of chardonnay and served meatballs wrapped in bacon as a bespectacled man in a navy-blue suit asked passersby to try on a wearable black body shield that he said could stop bullets ﬁred from a nine-millimeter handgun. They were available for $158, a sign at his table read, just below ideal for students, teachers, and travelers. In one corner of the room, feet from where guests posed with colorful boas and silly hats at a photo booth, a security company’s digital sign displayed hypothetical warnings in bright red letters: armed threat run hide fight run hide fight run hide fight.

Ten miles from Walt Disney World, the scene, at once festive and ghoulish, perfectly mirrored my conversations with vendors, who could pivot in a breath from uninhibited giddiness over the chance for coverage from a journalist to dour seriousness when asked about the awful things that had to keep happening for their businesses to survive. What made the enthusiasm appropriate, even necessary, they suggested, was the country’s urgent need for what they had to oﬀer. At one booth, two gray-haired men from Wisconsin were selling a mobile three-hundred-pound ballistic whiteboard, adorned with adorable animal illustrations and pocked with ﬁve bullet holes, that cost more than $2,900, or about ten times the price of whiteboards that couldn’t stop rounds designed for warfare.

“A teacher can sit there and use it for daily use,” Jim Weiss, who was in charge of marketing, said as he sipped on a bottle of Michelob Light. “And then the kids can just run behind it.”

“What we want to do is just give the kids, the teachers, a chance,” explained the company’s general manager, Jim Muth.

“So they can buy a few minutes,” Weiss added.

Muth had been in the whiteboard business for nearly two decades when a company that developed ballistic material for airport seating, oﬃce partitions, and fencing recognized a prime new possibility. “They said, ‘How do we begin to deal with schools?’” Muth recalled. “So, they contacted us.”

Elsewhere at the conference, vendors peddled “bleeding control bags” and pepper ball guns, window shades meant to prevent shooters from seeing inside classrooms, and a security proposal that would turn former special operations oﬃcers into undercover teachers. Threaded into every pitch was the implication that their product or service would make students safer — that, if purchased, it might save a life.

What few of the salespeople could oﬀer, however, was proof. Despite the billions spent every year, little research had been done on which safety measures actually protect students from gun violence, leaving schools to rely on self-appointed experts and consultants, who almost always base their recommendations on anecdotal information or experience in other industries.

“Many of the activities that schools undertake to promote safety and prevent problems, including use of technology, have not been evaluated,” according to a 2016 federally funded study by Johns Hopkins University. “There is limited and conﬂicting evidence in the literature on the short- and long-term eﬀectiveness of school safety technology.”

The vacuum of reliable evidence had not deterred a mass of vendors from venturing into the market and inundating schools with product spiels that make grand promises. A superintendent in an Illinois district that experienced a shooting two months before the conference told me that within hours of the incident, her inbox was “ﬂooded from vendors with some pretty disrespectful and tacky statements: ‘had you had this . . .’; ‘if you had this . . .’” That attitude was prevalent at the expo, which, at times, brought to my mind stories of eighteenth-century pharmaceutical salesmen who, because they worked in an unregulated industry, made phony guarantees about ineﬀective products to a nation desperate for relief. In the lead-up to the event in Orlando, so many companies requested space that its organizers ran out, stopping at 105 vendors, an all-time high for the conference and a 75 percent increase over the previous year.