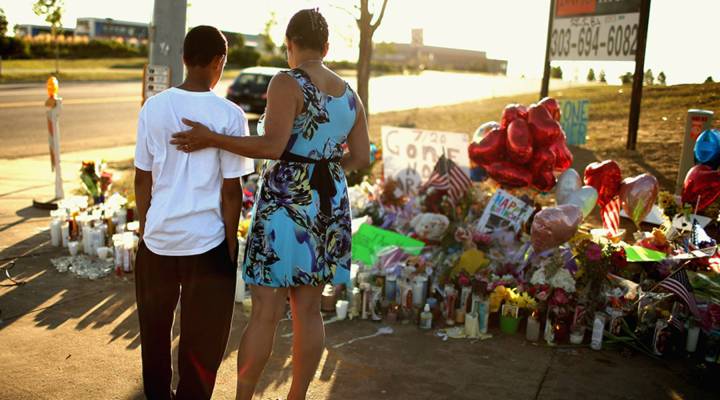 COPY
Barb Whitfield (R) and her grandson Wanya Whitfield, 15, visit at a makeshift memorial to the victims of the mass shooting at the Century 16 movie theater July 22, 2012 in Aurora, Colorado.  Chip Somodevilla/Getty Images

Barb Whitfield (R) and her grandson Wanya Whitfield, 15, visit at a makeshift memorial to the victims of the mass shooting at the Century 16 movie theater July 22, 2012 in Aurora, Colorado.  Chip Somodevilla/Getty Images
Listen Now

On a quiet Friday afternoon at the end of the school year in 2003, Susan Helper turned to see a man with a assault rifle just five feet away from her.

“It was like he was operating a garden hose,” she recalled. “He was just so calm.”

The shooter was a graduate of Case Western Reserve University, where Helper is an economics professor, but she didn’t know him. He simply came across her office, saw her, and fired, right as she shut the office door. That likely spared her from more serious injury.

“The bullet came through the door and then hit me in the chest and bounced onto my arm,” Helper said.

She spent the next four hours in her office closet until the police could arrest the shooter and escort her out. During the attack, the gunman killed one student, wounded Helper and another professor, and held roughly 100 people hostage.

“It took a couple of weeks for the physical injury to go away,” Helper said, describing how the bullet hit bone, leaving a big bruise and then a scar. “I wasn’t prepared for how long it would take for the diminishing of the mental issues.”

In the immediate aftermath of school or mass shootings, such at the recent school shooting in Parkland, Florida, or the concert shooting in Las Vegas, victims can seek out care for mental trauma and physical injuries from various sources, including through their regular health insurance, state’s victim compensation funds, nonprofit organizations and donations. However, the recovery process can stretch over years.

After the euphoria of surviving wore off, Helper said a fog set in. She was anxious and irritable. It was hard to plan even basic things. She didn’t go into work much that summer. When she returned to teach classes in the fall, she still found it difficult to concentrate on her research – an important part of university-level teaching. For about three years after the shooting, she didn’t publish a research paper.

“There was a kind of research that I was maybe more of a pioneer of and [I] kind of lost that lead,” she said. “Certainly, some projects were no longer timely and so I kind of dropped them.”

Despite these setbacks, Helper still enjoys a successful career. She even thinks the shooting made her a better, more empathetic teacher.

Even so, 15 years later, she still heads to Canada every Fourth of July to avoid fireworks – loud noises trigger anxiety and a feeling of being personally at risk. She has a similar reaction when she hears news reports about other mass shootings.

That sensitivity is echoed by many survivors, including Munirih Gravelly, who survived a shooting in the Aurora, Colorado movie theater in 2012 that left 12 others dead and dozens wounded.

It was a midnight showing of a “Batman” movie. Gravelly went with some co-workers, including Jesse Childress, who died while shielding her.

Gravelly had met Childress at work just a month earlier. They connected over shared interests, liked anime and superhero movies.

“It’s not like I knew him that well, but it felt like I did,” she said. “And that’s the part that bothered me the longest time. It seemed really weird to miss him that much.”

Gravelly works in information technology for the U.S. Air Force and was stationed in Colorado for three years after the shooting. She said she didn’t realize how much she wanted to leave until she was finally transferred to California.

Despite the fresh start, she said the shooting’s always present. Sometimes, the thought of Jesse will flash through her head and she’ll start tearing up. Other times, the buildings on the Air Force facility where she works will shake when test planes take off or land, which she finds “unsettling.”

“Anything in my house that I think might be dangerous I hide because my thought is if someone breaks in, I don’t want them getting any extra ideas and seeing a weapon and thinking, ‘Oh instead of just stealing her TV, I’ll murder her,’” she said. “I won’t even leave my metal nail file out on the counter.”

She doesn’t like to tell people, even co-workers, where she lives.

“It’s not like I suspect everybody of being a potential shooter,” she said. “But I just don’t want to give anybody a chance to be that either.”

Over the years, Gravelly has realized she’s not going to get over the shooting, so she said she had to find “a place to put it,” in order to control how much it affects her.

“It’s OK if you’re still a little messed up forever by what happened,” she said. “You still have your life, you can still find a way to live it happily. It’s just going to be different from before.”